Kyle Hayes, who saved his wife and unborn child with CPR, has been named winner of the Sudden Cardiac Arrest Foundation’s People Saving People Award.

Kyle Hayes, of Eastvale, California, has been named winner of the Sudden Cardiac Arrest Foundation’s People Saving People Award for saving the lives of his wife, Jennifer, 34, and their unborn son with CPR. The announcement and award presentation took place at the Cardiac Arrest Survival Summit on December 13 in Seattle, WA.

Their story began on November 9, 2017. Jennifer Hayes, a pediatric nurse, was 30 weeks pregnant and enjoying a “perfect” pregnancy. That changed in an instant when she collapsed at home in sudden cardiac arrest. Kyle heard her fall and found her in their 3-year-old son’s room, face down, unresponsive, and having a seizure. He immediately called 911 and was instructed by the dispatcher to begin CPR. Moments later, remembering that his neighbor, Russ, a police officer, was trained in CPR, he ran across the street and pounded on the door. Not waiting for an answer, he rushed back and continued CPR. Russ soon followed and took over compressions until first responders arrived.

Five minutes after the 911 call was made, paramedics arrived. Jennifer received 15 minutes of CPR and two shocks with a defibrillator before her heart returned to a normal rhythm. She was taken to a local hospital, but due to her pregnancy, she was airlifted to a hospital with a specialized level of care.

It was determined that the likely cause of her cardiac arrest was eclampsia (when high blood pressure during pregnancy results in seizures). The cure was to deliver the baby. In the early morning of November 10, Micah was delivered by C-section, 10 weeks early. He was not breathing when he was born and weighed only 3.5 pounds. He was intubated and admitted to the Neonatal Intensive Care Unit (NICU).

Micah remained in the NICU for 71 days, meeting every milestone along the way. On January 21, 2018, he was discharged home. Today, both Jennifer and Micah are doing well. 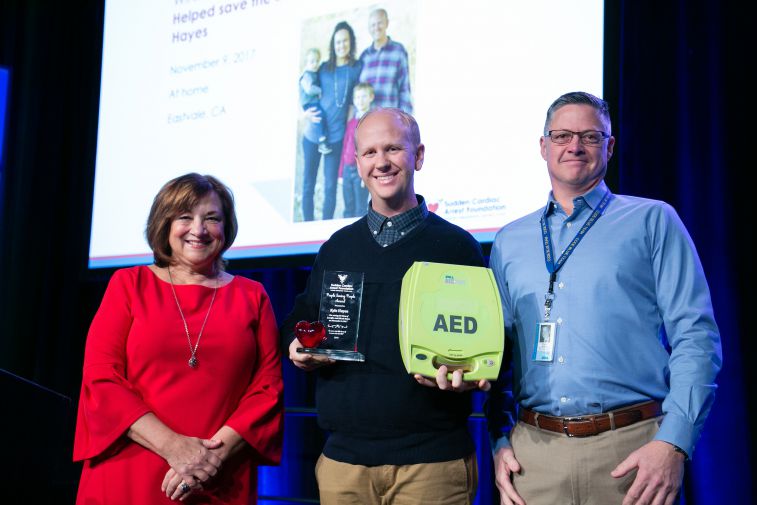 Mary Newman, president of the Sudden Cardiac Arrest Foundation, presented the award to Kyle. “Everyone is a winner when people nearby act quickly and decisively to help victims of sudden cardiac arrest,” she said. “And so, it was very difficult to select the winner of the 2019 People Saving People Award. But we felt that Kyle’s heroic actions exemplify the critical importance of immediate bystander intervention when sudden cardiac arrest occurs. And the fact that he saved two lives is clearly remarkable.”

In accepting the award, Kyle thanked Russ, the dispatcher, and all those who contributed to saving the lives of his wife and unborn son. He was then joined onstage by Jennifer, Matthew and Micah.

In addition to the award, Kyle received an automated external defibrillator (AED), donated by ZOLL, which the family will give to an organization in their community.

“If not for Kyle,” said Jennifer, who nominated him for the award, “I am confident that Micah and I would not be alive today, doing as well as we are. His quick actions in calling 911 and starting CPR not only saved one life, but two.”