SCA Awareness and Messaging Study: Creating a Culture of Action

The public's motivation to learn CPR/AED skills and to act in an emergency increases with a clear understanding of sudden cardiac arrest (SCA) and the impact these skills have on increasing survival, according to research conducted for the Sudden Cardiac Arrest Foundation by StrataVerve, a global consumer insights practice. 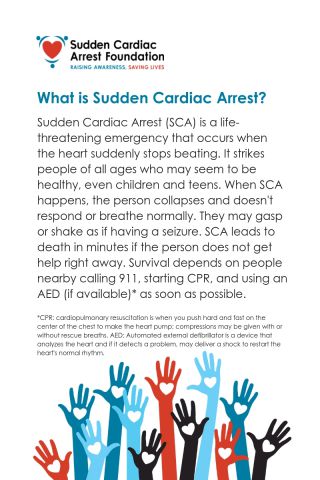 Survival from sudden cardiac arrest (SCA) outside hospitals depends largely on bystander intervention. Building upon a baseline study of awareness and understanding of SCA, CPR and AEDs conducted in 2015, a follow-up study was conducted in November 2017 to advance learnings.

The study hypothesized that one factor in low SCA survival is public confusion and unfamiliarity with SCA, a key finding in the original baseline study. The 2017 study sought to determine the impact a layperson-friendly definition of SCA has on the public’s perceived importance of learning CPR/AED skills and their motivation to perform these skills in an emergency. In addition, the study aimed to test mutually exclusive messages to learn which ones best motivate action and grab attention as a basis for communications strategies.

The study included an online quantitative survey of a representative national sample of adults (n=2,232) and in-depth qualitative interviews among respondents from 10 states (n=20). Online respondents were exposed to framing questions, and then split into two matched panels. One panel was exposed to a layperson-friendly definition of SCA (n=1,128); the other was exposed to 11 discrete messages (n=1,104). Questions pre- and post-exposure to the SCA definition measured lift in importance to learn skills and likelihood to give CPR/use an AED. Messages were tested on relative strength in motivating action and grabbing attention. In-depth personal interviews were conducted to tease out softer insights and help bring quantitative findings to life. Video clips are shown below.

* Tested definition of SCA: Sudden Cardiac Arrest (SCA) is a life-threatening emergency that occurs when the heart unexpectedly stops beating. It strikes seemingly healthy people of all ages, even children and teens. When SCA happens, the person collapses, becomes unresponsive, and is not breathing normally. The person may appear to be gasping, snoring or having a seizure. SCA leads to death within minutes if the person does not receive immediate help. Survival depends of the quick actions of people nearby to call 911, start CPR (cardiopulmonary resuscitation), and if available, use as AED (automated external defibrillator) as soon as possible.

*Refined definition of SCA at 8th grade level: Sudden Cardiac Arrest (SCA) is a life-threatening emergency that occurs when the heart suddenly stops beating. It strikes people of all ages who may seem to be healthy, even children and teens. When SCA happens, the person collapses and doesn’t respond or breathe normally. They may gasp or shake as if having a seizure. SCA leads to death in minutes if the person does not get help right away. Survival depends on people nearby calling 911, starting CPR¹, and using an AED² (if available) as soon as possible.

¹CPR: Cardiopulmonary resuscitation is when you push hard and fast on the center of chest to make the heart pump; compressions may be given with or without rescue breaths.

²AED: Automated external defibrillator is a device that analyzes the heart and if it detects a problem may deliver a shock to restart the heart’s normal rhythm.

As part of this study, in-depth interviews were conducted in Orlando, FL among 20 respondents, ages 21-60 from 10 states. These interviews provide some glimpses into public awareness about sudden cardiac arrest.

Interviews conducted for the Sudden Cardiac Arrest Foundation by StrataVerve in November 2017 were used as part of the Call-Push-Shock. campaign, conducted in collaboration with Parent Heart Watch, and launched in June 2018.