Now she is advocating to save other lives.

PITTSBURGH, PA--These were uncertain times. It was the beginning of the coronavirus pandemic. To find some semblance of normal, Kaitlin Ryan, 15, a student at Palm Harbor University High School, and her father Stephen Ryan, 49, would often go to a nearby golf course to get outside and share their passion for the sport. After dinner, Kaitlin would go to her dad’s home office wearing her hat and a smile on her face to signal she was ready. Then they would be on their way.

On this particular day, April 19, 2020, they went to a local golf course to work on her chipping and putting. As Kaitlin was lining up a shot, she looked over toward her father and saw that he was on the ground.

“I was hitting my second shot, looking at the target 100 yards away, and I noticed something was different,” said Kaitlin. “My dad was lying face down on the green. Sudden Cardiac Arrest was not the first thing that crossed my mind.”

Kaitlin checked for a pulse and called her mother, Sharon Ryan, who is a nurse. Then she called 911 while starting CPR.

Fortunately, Kaitlin had learned CPR and how to use an AED in 6th grade, with reviews in 7th and 8th grade at Espiritu Santo Catholic School.

Within minutes, Sharon found them on the course. “We have a family tracking app,” she said. “I’m so glad I had it that day because the app pinpointed where they were on the course. When I arrived, Kaitlin was doing CPR with good technique and was on the phone with 911.” The cadence of the metronome from the emergency dispatcher helped give Kaitlin confidence she was keeping the right pace with each compression.

Sharon then took turns with Kaitlin in providing CPR. “I’m not sure how long we were alone,” said Kaitlin, “but it felt like forever.”

Steve was transported to nearby Mease Countryside Hospital, part of the BayCare Health System. He spent three days in a medically induced coma and nine days in the hospital.

This was an especially stressful time for the family: due to Covid restrictions, they weren’t able to visit him at the hospital, but eventually were able to FaceTime with him.

“They woke me up on the third day, which was Kaitlin’s birthday,” said Steve. “I didn’t realize why I was there and I was shocked to hear what had happened.”

Steve had been diagnosed with cardiomyopathy before and had had some arrythmias, which probably led to his cardiac arrest. And so, he was fitted with an implantable cardioverter defibrillator. Now he goes to cardiac rehab twice a week in addition to his regular gym.

The family later went to East Lake Fire Rescue to thank the EMTs who helped save Steve’s life. “We enjoyed meeting them. They don’t always get feedback on how things turn out, so they really appreciated it,” said Sharon.

“When I learned CPR in middle school, I never thought I’d have to use it,” said Kaitlin. “For me, it was one of those things where I understood SCA happens, but I never thought it would affect me, my family, or anyone I was close to.”

As a nurse, Sharon had provided CPR before. “Giving CPR is always intense,” she said, “but it’s different when it’s your husband—someone you love. Instinct just took over and we were both very focused,” she said. “He wasn’t leaving. We were making sure of it.”

Sharon’s advice: “Don’t be afraid to attempt CPR when its needed.” And, she added, “If there is an AED nearby, don’t be afraid to use it because it walks you through the process. Unless you’ve been exposed to it, you don’t realize that using an AED is fairly simple. Even our 12-year-old daughter already knows how to use one.”

The Chip in for Sudden Cardiac Arrest 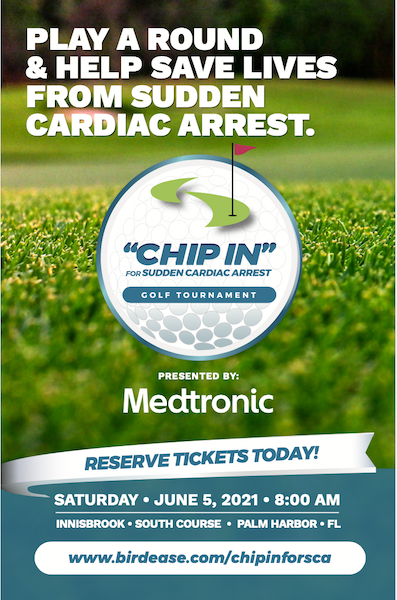 Full of gratitude that Steve not only survived SCA but has no deficits, Kaitlin and her family began to consider ways to pay it forward. They created “The Chip in for Sudden Cardiac Arrest,” a golf fundraiser for the American Heart Association and Sudden Cardiac Arrest Foundation scheduled for Saturday, June 5th at Innisbrook, a Salamander Golf and Spa Resort in Palm Harbor, FL.

The golf tournament will provide plenty of opportunities to learn how to save a life. BayCare Health System will provide CPR demonstrations and players who participate will get a mulligan if they demonstrate CPR correctly. In addition, a Philips HeartStart OnSite AED will be auctioned off at the tournament.

“We are the fortunate few where this turns out good,” said Steve. “I’m really proud of Kaitlin. She is not only my hero, but now she’s stepping up to make a difference in other people’s lives.”

To support Kaitlin’s efforts to save more lives, explore these links: