Review Looks at State Requirements for AEDs in Schools 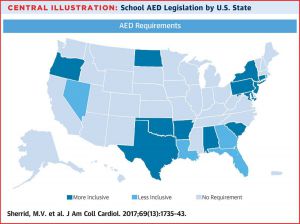 The installation of automated external defibrillators (AED) in schools is associated with increased survival after sudden cardiac arrest (SCA), according to a review published March 27th in the Journal of the American College of Cardiology.

They found that only 17 of 50 U.S. states had some legislation requiring AED installation in schools, but the remaining 33 states had no legislation. In states with legislation requiring AED installation, requirements were far from comprehensive, with only five states offering unequivocal funding to schools for purchasing AEDs. Researchers calculated that nearly 35 million public elementary and secondary students in the U.S. attend a school with no legislative requirement for a school AED.

They explain that the principal obstacle of installing AEDs in schools is cost, which can be substantial, particularly in states with many schools. However, the estimated $3,300 cost of two AEDs and training for each school is small when compared with the overall expenditure per student in U.S. elementary and high schools, which averaged $11,000 – $12,000 in 2010.

The researchers also note that a questionnaire study of SCA in U.S. high schools determined that two in 50 U.S. high schools can expect an SCA event each year. Several observational studies showed an association between AED installation in schools and colleges with increased survival. Collapse to defibrillation time was shorter when administered by bystanders than by Emergency Medical Services (3.3 vs. 12.9 minutes). In schools with AED programs, the survival rates of students with cardiac arrests and a shockable rhythm ranged from 64 to 72 percent.

The authors conclude that timely AED availability is important in all population-dense settings, and an AED requirement in schools should be added in these states as part of a policy to expand the reach of public access defibrillation community wide.

"This review should be used to inform the debate about expanding community-access AEDs into schools," said Sherrid.

The following are 10 points to remember from this article dealing with the importance of universal placement of automated external defibrillators (AEDs) in schools: