Call-Push-Shock (CPS) is a national collaborative movement co-sponsored by Parent Heart Watch (PHW) and Sudden Cardiac Arrest Foundation (SCAF). It is designed to drive public awareness, understanding, and action in cases of out-of-hospital cardiac arrest and increase survival rates by speaking in one voice across multiple organizations. CPS urges the public, when it witnesses sudden cardiac arrest, to call 911, provide CPR, and use an automated external defibrillator (AED), if available. 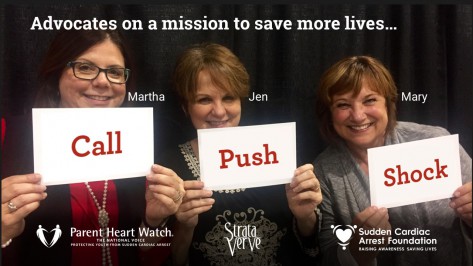 The CPS concept was created by Jennifer Chap (StrataVerve or SV), an SCAF Advisor, Martha Lopez-Anderson (PHW), and Mary Newman (SCAF) in 2017. Messaging is based on consumer research conducted by SV for SCAF in 2015 and 2017. This research also led to development of a tested layperson-friendly definition of sudden cardiac arrest, written at an 8th grade level, which is part of the campaign.

Sudden Cardiac Arrest (SCA) is a life-threatening emergency that occurs when the heart suddenly stops beating. It strikes people of all ages who may seem to be healthy, even children and teens. When SCA happens, the person collapses and doesn’t respond or breathe normally. They may gasp or shake as if having a seizure. SCA leads to death in minutes if the person does not get help right away. Survival depends on people nearby calling 911, starting CPR, and using an AED (if available) as soon as possible.

CPS was developed in response to a 2015 report from a workshop hosted by the Institute of Medicine (now the National Academy of Medicine). SCAF was a sponsor of this landmark meeting. There, SCAF debuted its signature video, “Together We Can Save More Lives,” created in collaboration with SV.

Among other things, the IOM report recommended:

PHW and SCAF jointly launched CPS in June 2018 during National CPR-AED Awareness Week. More than 50 organizations have joined CPS since its inception, including the CDC.

Campaign assets include a landing page, a user-friendly toolkit that features a simple definition of SCA tested among laypersons, an infographic, images created for Facebook and Twitter, videos of “man-in-the-street” interviews, and a social media calendar with suggested posts. Anyone may use the generic versions of these assets, however, there is a modest fee for customized assets. The logos of organizations paying this fee are also listed on the CPS landing page. Assets are available in English and Spanish.

An abstract on Call-Push-Shock was published in Circulation, a journal of the American Heart Association.

Information on the campaign has been presented at the following conferences:

For more information, reach out to contact [at] callpushshock.org.