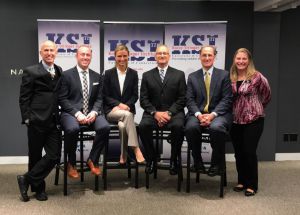 The Korey Stringer Institute at the University of Connecticut has announced the release of the Health and Safety Policy Ranking for High School Athletics. The purpose of this study is to provide a graded assessment of the implementation of health and safety policies related to the leading causes of sudden death and catastrophic injury in sport at the state level for secondary school athletics within the United States. The review was based on publicly available information from high school associations and state legislation.

The individual state rankings were based on the four primary causes of sudden death in high school sports, which account for 90 percent of sport-related deaths: sudden cardiac arrest, traumatic head injuries, exertional heat stroke, and exertional sickling. There have been 735 fatalities and 626 catastrophic injuries among high school athletes between 1982-2015.

A positive finding from this study is that every state and the District of Columbia has some type of health and safety policy requirement for their high schools to follow. However, not a single state meets all of the minimum best practice requirements for the areas focused on in this project.

North Carolina has the most comprehensive health and safety polices in place for secondary school athletics, with a score of 79 percent. Colorado has the fewest, with a score of 23 percent. The median state score was 47 percent. States scoring in the top 10 percent were North Carolina, Kentucky, Massachusetts, New Jersey, and South Dakota. States scoring in the bottom 10 percent were Minnesota, Montana, Iowa, California, and Colorado.

Those speaking at the August 8 press conference were Bob Gfeller, David Csillan, Dr. Morgan Anderson, Dr. Douglas Casa and Dr. William Adams. Gfeller spoke on the importance of implementing policies to ensure that no parents need to go through the tragic loss of a child. Anderson echoed these comments by stating “We have tragic examples from the past that motivates us daily to make a change.”

The Orthopedic Journal of Sports Medicine will publish the study with these findings in the September issue. A PDF of the article is attached.

The report is dedicated to the parents who have lost sons and daughters participating in high school athletics. KSI urges the public to contact their state high school association leaders and legislators to discuss their ranking and ways to improve their ranking going forward.

To see a response to the KSI report from the National Association of State High School Association, click here.

To see a related editorial by John Doherty, click here.