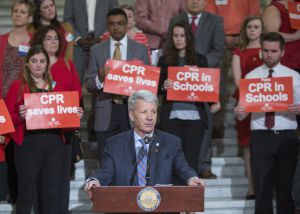 Killion’s Senate Bill 521 will strengthen academic standards in schools for CPR training in grades nine through twelve while adding hands-only CPR instruction to Pennsylvania’s education curriculum. If enacted, this instructional enhancement in high schools will substantially expand CPR training in the state.

The goal of Killion’s legislation is to prepare students with fundamental life skills.

“This bill will have a tremendous impact on CPR training,” said Killion. “If this becomes law, future generations will better learn how to administer CPR while attending high school. This has the potential to save countless lives for years to come,” he added.

Killion noted that over 350,000 cardiac arrests occur outside of hospitals each year. There is a less than ten percent survival rate for sudden cardiac arrest.

Throughout the current legislative session, Killion has heard from over 40 constituents and advocates supporting this legislation, many of whom shared stories about cardiac arrest experiences and the importance of CPR training.

This legislation is a top priority for the American Heart Association and the American Stroke Association.  It is also supported by the Pennsylvania State Education Association, Sudden Cardiac Arrest Foundation, Children’s Hospital of Philadelphia, Pennsylvania Athletic Trainers Society and Independence Blue Cross.

Killion said “Knowing how to properly administer CPR can make the difference between life and death.  I hope the state House joins the Senate in passing this bill.”