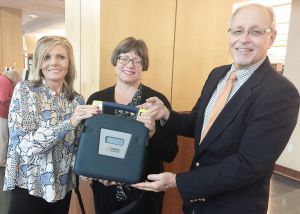 The battle lasted nearly a decade. On Tuesday, Rhonda Harrill achieved her goal from the get-go: mandatory placement of at least one automated external defibrillator device in every Tennessee public school.

The state House of Representatives finally made it happen with the sponsorship and guidance of state Rep. Bob Ramsey, R-Maryville.

There have been other AED bills passed previously at Harrill’s urging, including the Tanner Lee Jameson Act. But this was the final act, the one that ensures all 1,800 public schools in the state will have the device. The Senate had already passed its version. The governor’s signature will make it official.

For Harrill, the occasion brought to mind a hymn particularly popular during Easter.

Harrill was referring to a hymn, the one preceded with hallelujahs before beginning the lyrics: “The strife is o’er, the battle done.”

Harrill’s fight started when her 13-year-old son Tanner died in 2009 from cardiac arrhythmia after collapsing during a basketball practice at Eagleton Middle School. If an AED had been available, not locked away like it was during that practice, her son would have survived.

That’s what Harrill believes, and she’s dedicated herself to making sure every school in the state has at least one AED, one that is placed where it is accessible, including during athletic events, and with school personnel trained to use it.

Harrill wasn’t able to attend Tuesday’s vote on Capitol Hill, but she sent Ramsey a letter. He read it before the assembled representatives.

“It was a pretty good summation of events from since 2009,” Ramsey said.

Among the words in the letter: “Grief is like a war. I either win or I die trying. This AED war is something I won’t lose. It’s the last thing that I can do for my son Tanner and I will get it done.”

Ramsey told Harrill that after he read the letter, House members responded with a standing ovation.

Ramsey said there have been regulatory reasons for the Legislature passing variations of the AED bill in previous sessions. Part of it had to do with funding. Originally it encouraged, not mandated, AEDs. Of the about 1,800 public schools in the state, around 200 didn’t come up with the money. One year, the governor’s office found funds elsewhere to fill the gap, Ramsey recalled.

As years went by, supporters stepped up. More businesses, civic clubs and other organizations donated the devices. When the bill was filed this year, the fiscal note for the state to cover the cost came to just under $50,000 to supply the 36 schools without AEDs. That fiscal note plummeted as every school in Tennessee except for 13 came up with the money by the time the bill was passed. The state can easily fill that gap.