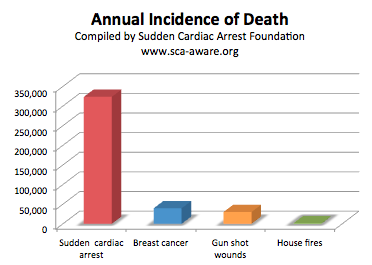 The Sudden Cardiac Arrest Foundation, a national nonprofit organization, will participate in the Highmark Walk for a Healthy Community on Saturday, May 18 in Pittsburgh, PA, to raise awareness about the nation’s leading cause of death and help save lives. Survivors and families affected by sudden cardiac death are urged to join or support the team here.

PITTSBURGH, PA--Sudden cardiac arrest (SCA), an abrupt, unexpected pulseless condition, is a much bigger public health problem than most people realize. It affects nearly 360,000 people each year in the U.S., including youth, and only 10% of victims survive. [1] For most unsuspecting victims, dropping dead is the first indication of a heart problem.

To grasp the enormous scope of this life-threatening condition, consider the following:

The good news is that when SCA victims are treated quickly with CPR and automated external defibrillators (AEDs) before emergency medical services arrive at the scene, survival rates jump to about 40%. [5] If the national average survival rate rose to 40%, more than 100,000 additional lives could be saved each year. 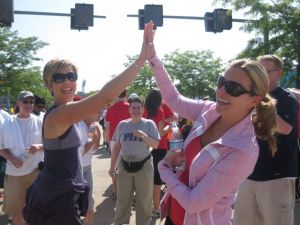 Award-winning TV news journalist and sudden cardiac arrest survivor, Susan Koeppen, understands this first hand. “Knowing CPR and how to use an AED are key to saving someone who goes into cardiac arrest. Doing something is better than doing nothing in an emergency situation,” said Koeppen, who serves as National Spokesperson for the Sudden Cardiac Arrest Foundation.

The Sudden Cardiac Arrest Foundation aims to elevate the national dialogue about sudden cardiac arrest through multiple initiatives, including its participation in the Highmark Walk for a Healthy Community on May 18 in Pittsburgh. Highmark underwrites the cost of the walk for more than 68 health and human service organizations, so that all monies go directly to the charity of choice.

“We invite people who have survived sudden cardiac arrest and those who have lost loved ones to SCA to join or support our team,” said Mary Newman, MS, Sudden Cardiac Arrest Foundation president. “Together, we will help the public better understand the critical need to call 911, give CPR, and use AEDs to save lives threatened by sudden cardiac arrest.”

CPR-AED demonstrations will be provided at the Foundation booth (No. 55) during the Walk. For information about parking, click here.

Interested parties may join the team or support the team here through June 30. Contributions may also be made here or by sending a check to the Sudden Cardiac Arrest Foundation, 7500 Brooktree Road, Suite 207, Wexford, PA 15090.

The individual or team raising the most funds for the Sudden Cardiac Arrest Foundation through the 5K walk will win an AED donated by DefibTech, to be awarded the first week of June during National CPR-AED Awareness Week.

People who contribute $50 or more will be entered into a drawing to win one of these cool prizes provided by Highmark:

About the Sudden Cardiac Arrest Foundation

About the Sudden Cardiac Arrest Network