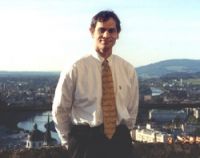 Born and raised in Nashville TN, Dr. Khan is currently Assistant Professor of Medicine/Cardiology at the Emory University School of Medicine and Director of the Coronary Care Unit and Cardiovascular Research at the Grady Memorial Hospital in Atlanta.

“I want to increase the awareness of sudden cardiac death (SCD). It is a very prevalent problem that we face, with more people dying from it than any other cause,” Bobby said. “People don’t really recognize this until it’s after the fact!” He went on to explain, “A lot of times, the first presentation is they have a massive heart attack, or collapse and fall down dead. That’s what happened to Tim Russert.”

“The next step, after education, is to prevent SCD from happening. I’m a preventative cardiologist, and my goal is to stop it from even getting to that level. I want to identify the people who have risk factors and help them take care of it, to stop the problem or try to manage it.” He went on to say we have the technology; imaging techniques, and therapies we know work. “I was as shocked as everyone else that this happened to Tim Russert. Had there been someone who knew how to use a defibrillator, he might still be with us today.”

Bobby recognizes that the biggest challenge for small non-profit organizations is financial. “We have dedicated people; staff, volunteers and have made great progress in getting corporate sponsorship.” He thinks the new website is an excellent example of what can be achieved, with new features like interactivity and rich content.

“[Sudden Cardiac Arrest] is a very common, prevalent condition that can potentially affect anybody—unlike other types of diseases that only strike certain parts of the population—any age, at any time of their lives.” Bobby said as encouragement to interested sponsors and donors. “I’d like to focus on a fund-raising campaign to help the organization grow.”

Dr Khan was once overweight. During his first year in medical school he changed dramatically; exercising, changing his diet and watching his weight. This is a personal achievement he is proud of, and led to his specialization in an MD/PhD program and cardiovascular diseases. “I have a research team at Emory that is looking into both medical and non-medical techniques to try and keep people healthy.”

It is not surprising, however, that Bobby chose to be a physician; his father was a cardiologist, although he never directed Bobby to follow his footsteps. “He did not make me become a doctor, but he made me want to become one!” Bobby said with pride.

On a professional level Dr Khan admires a colleague of his father, Dr. Jeremy Swan, a cardiologist from Ireland that developed the famous Swan-Ganz catheter (widely used in intensive care units). In fact during his postgraduate residency at the University of California, Los Angeles (UCLA), he considered them his second parents since he spent so much time with them.

Dr. Khan’s research interests include atherosclerosis and heart failure, and he is heading to Canada next year to undertake a special four-month program of international collaborative study on health and sustainability, with a view to commercializing the therapies identified.

Bobby is grateful the board members are willing and able to assist the foundation with their professional advice, and personal experiences, in addition to the clinical guidance and scientific knowledge that supports the foundation’s activities in “raising awareness, saving lives”.