David Belkin, a member of the Sudden Cardiac Arrest Foundation Board of Directors was recently featured in an article by Michael Gerber, "Saving People in Cardiac Arrest: It's often the quick actions of strangers that make a difference between life and death," published in the July/August issue of Bethesda Magazine. Following is an excerpt. 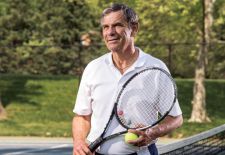 David Belkin, a longtime Bethesda resident, doesn’t recall any symptoms or warning signs before his cardiac arrest. He remembers waking up on a basketball court at Lakeside Elementary School in Honesdale, Pennsylvania, thinking that he had passed out. He was embarrassed, and didn’t want to interrupt the pickup basketball game that his son-in-law had brought him to near his family’s vacation home.

“I felt a little nauseous and dizzy, and I figured, OK, I just was dehydrated, I collapsed, I’m fine—just take me over to the bench,” says Belkin, a consultant to nonprofit organizations. “That’s when they told me that my heart stopped, and I said, ‘Come on, you’re crazy.’ ”

An ambulance arrived minutes later, but Belkin actually had an emergency physician to thank for his survival. Roman Matlaga, a regular at the Sunday morning game, usually has nurses, EKG monitors and other equipment when he treats a patient in cardiac arrest, but in this case, his quick actions on the court are the reason Belkin can sit in his East Bethesda home with his wife, Ellen, and talk about the events of February 2007, just days after his 65th birthday.