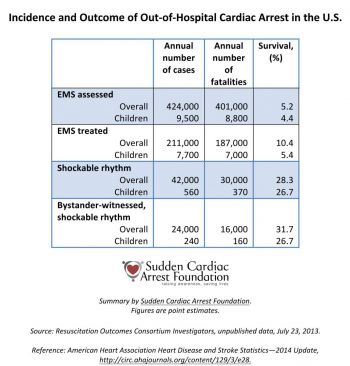 PITTSBURGH, PA--The American Heart Association (AHA) recently released its Heart Disease and Stroke Statistics—2014 Update, published in Circulation online in December and in print in January. The section on non-traumatic out-of-hospital cardiac arrest (OHCA), an abrupt and unexpected pulseless condition, is based largely on information derived from an ongoing registry from the Resuscitation Outcomes Consortium (ROC) multi-center clinical trial. According to the AHA, the incidence of OHCA in adults and youth is best characterized by ROC unpublished data from July 23, 2013.

The 2014 update suggests that more than 1,000 people suffer non-traumatic cardiac arrest outside hospitals—including about 26 children—each day in the U.S. Overall survival rates are approximately 10 percent. Among young victims, the survival rate is about five percent.