New report suggests the incidence of out-of-hospital cardiac arrest is 326,200. The average survival rate is 10.6% and survival with good neurologic function is 8.3%. Nearly one in three victims survives when the arrest is witnessed by a bystander. 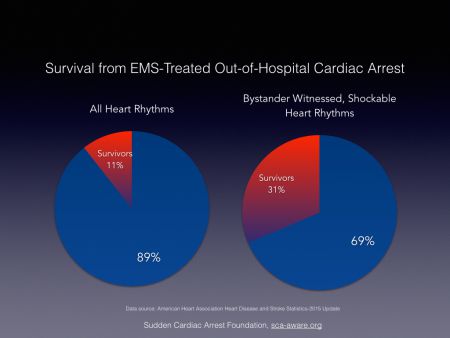 DALLAS, TX--For the first time in the 50 years that the American Heart Association/ American Stroke Association has released an annual snapshot of heart disease and stroke statistics in the United States, the new report adds a global view.

Health data compiled from more than 190 countries show heart disease remains the No. 1 global cause of death with 17.3 million deaths each year, according to “Heart Disease and Stroke Statistics — 2015 Update: A Report From the American Heart Association.” That number is expected to rise to more than 23.6 million by 2030, the report found.

The annual report includes a chapter on Sudden Cardiac Arrest. According to the report, about 326,200 people experienced out-of-hospital cardiac arrests (OHCA) in the U.S. in 2011. (This compares with a reported incidence of 424,000 in the AHA's Heart and Stroke Statistics--2014 Update.) Of those treated by emergency medical services, 10.6 percent survived. Of the 19,300 bystander-witnessed cases in which individuals had a heart rhythm that could be treated effectively with a defibrillator (ventricular fibrillation-VF or ventricular tachycardia-VT), 31.4 percent survived.
"The findings from the American Heart Association report suggest encouragement and caution," said Bobby V. Khan, MD, PhD, Director, Atlanta Vascular Research Foundation, who serves as Sudden Cardiac Arrest Foundation board chair. "First, even though cardiovascular disease continues to carry a high burden in the United States--one in three deaths is directly attributed to CVD--there has been a significant reduction in events over the last 50 years, a trend that has continued over the last decade. Early recognition and improvement of risk factors involved in CVD have contributed to this trend.
"Furthermore, the AHA report findings indicate that earlier intervention in cases of sudden cardiac arrest increases the chances of survival and a better quality of life. We must continue to emphasize the importance of doing whatever is possible to prevent sudden cardiac arrest--and we must continue to educate the public about what to do if they witness a sudden cardiac emergency."

What is Sudden Cardiac Arrest?

There are a number of ongoing challenges to understanding the epidemiology of cardiac arrest in the U.S. Despite being a leading cause of heart disease death, there are currently no nationwide standards for surveillance to monitor the incidence and outcomes of cardiac arrest. In addition, it is challenging to define what is “unexpected” or “sudden” death.

Sudden cardiac death has been defined as unexpected death from a cardiac cause that occurs within one hour of symptom onset (witnessed) or within 24 hours of last being observed in normal health (unwitnessed). However, this definition is difficult to apply in the real-world setting.

Despite these challenges, the latest statistics on OHCA provide valuable insights. Following are some highlights.