Stan Wisniewski experienced sudden cardiac arrest on December 17, 1954. Sixty-six years later, he is still going strong. The Sudden Cardiac Arrest Foundation had the opportunity to catch up with Stan and his wife, Jaci, earlier this week.

Here is his story, in his own words.

An incredible story of survival

The year 1954 was a time when there weren't any crash carts, 'code blue', CPR, EMTs or paramedics and only one defibrillator in the city of Chicago.

There were very few specialists in the medical field and, at the hospital where Stan was employed as a radiology technician, there were only surgeons, internists, a pathologist who interpreted EKGs and a radiologist, as well as nurses.

The cardiac arrest occurred at Lutheran Deaconess Hospital on Leavitt Street in Chicago, Illinois. This hospital no longer exists, but the sister hospital is Lutheran General Hospital in Park Ridge, IL, a suburb of Chicago.

On Friday December 17, 1954 at approximately noon, Stan was sitting on a chair in the dark room of the Radiology Department waiting for films to be processed. The department was on the ground floor of the hospital.

There were two other technicians in the dark room also waiting for their films to be processed. There was approximately two minutes of processing time before the lights could be turned on. Since automatic film processing wasn't invented at that time, all processing was done by hand.

Stan mentioned to the technicians that he felt very warm, but did not feel faint or ill and was not experiencing any pain. His two co‐workers teased him that he felt warm because of the red socks he was wearing that day. Stan then fell off of the chair onto the floor, without making any audible sounds.

When the lights were turned on the two technicians discovered him on the floor. They thought he had fainted, but went to get the Radiologist, Frank L. Hussey Sr. M.D. He ordered one of the techs to get epinephrine so he could inject it directly into the heart since he couldn't detect a pulse or any respiration. He also requested oxygen. The other tech ran across the street to St. Mary's Hospital to get a priest, so he could administer Extreme Unction (last rites of the Catholic Church). At the same time Joel Knudson M.D., an internist, came into the department looking for some x‐ rays. He was summoned to the dark room and upon seeing the situation, he checked for heart sounds and pulse, but found none. There was complete circulatory failure and Stan appeared to be dead. 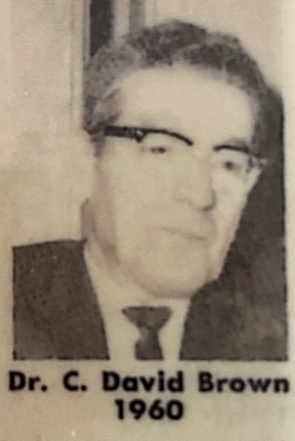 At that time, a surgeon, C. David Brown M.D., a former Army surgeon, came into the department also looking for his x‐ray films. As he called out to see where everyone was, he was also summoned into the dark room.

When he assessed the situation and was given all of the information, he made the instant decision that "there was nothing to lose" (his words), he reached into his pants pocket and took out his pocketknife and opened Stan's chest, cutting through Stan's left nipple. He reached into the chest cavity and broke off two ribs so he could begin manual cardiac message.

Another physician was coming down the hall and heard the commotion and he came in to assist, this was George Schroeder M.D., a surgeon. At that point there were three doctors using bare hand manual message.

A technician was sent to get a gurney so that Stan could be transported to the surgery department on the 5th floor while the doctors were continually messaging his heart.

The hospital administrator made an emergency call over the PA system to all doctors in the building to go immediately to the surgery department. Upon arriving in surgery, a desperate 2‐hour battle began to save his life. At this time his heart would twitch but would not hold a regular beat. A defibrillator was called for from another hospital in the city, but when it arrived and was plugged in, it blew a fuse so that option was no longer available.

There was a nurse anesthetist present and ready to administer oxygen, but wasn't needed immediately. At that time in the medical field anesthesiologists were rare and not on the staff at this hospital.

At the end of 2 hours and 15 minutes, Stan’s heart began a regular heartbeat, which then enabled the doctors to cease manual message. Chest drains were inserted before his chest could be closed, because of the high degree of infection from the bare hand message.

The chief dangers were from possible brain damage from loss of oxygen and loss of blood supply during the manual message and also the high degree of infection spreading throughout his body.

At this time Stan was moved to a private room with 24‐hour private duty nurses, since ICU and cardiac nursing did not exist. He was placed in an oxygen tent, (made of heavy plastic) which covered half of the bed and covered Stan down to his waist. It was secured with blankets and also tucked under the mattress.

Now Stan had a chance to live.

All the time that Stan was in surgery, his parents were called and they immediately came to the hospital where they were met by the radiology staff and they all began praying, each in their own way.

36 hours after surgery, Stan was awake, but unaware of the event that had taken place. During short periods of wakefulness, staff and family were requested by the doctors to ask Stan his name, home address and how old he was. This was done so the doctor's could assess any brain damage. Stan answered all of the questions correctly and the doctors were amazed that there didn't seem to be any brain damage.

The hospitalization lasted for 22 days and 10 of those days were in the oxygen tent.

When Stan was discharged in January of 1955, to go home, he weighed 120 pounds, compared to his normal 190 pounds. He was sent home with a bottle of nitroglycerine tablets that he never needed or used.

Stan recuperated at home for about a month and returned to work part time for a few weeks and then resumed full time as a Radiology Technician in the same department.

In 1960, Lutheran General Hospital opened and Stan was promoted to radiology department manager, one of only 3 in the United States. Lutheran Deaconess Hospital was then purchased by another hospital and was closed for demolition.

Jaci, his wife, also was a radiology technician in the same department since 1953 and they began dating at the end of 1955, they became engaged in June of 1956 and were married in April 1957. They recently celebrated their 63rd anniversary. Stan retired from Radiology in 1993.

Numerous stories of the case appeared in domestic and foreign press. This case has also been cited on two occasions in medical literature and through personal communications. This is all factual, though it sounds unbelievable.

Stan and Jaci are currently living in Sherrills Ford, North Carolina. They have two children and two grandchildren.

If there's no defibrillator, pull out a knife?