My Daughter, Alicia, Is My Hero. I Attribute Her Valor to Her Military Training

On December 6, 2012, I moved to Lakenheath, UK, to live with my daughter Alicia, who was stationed there because she was part of an Air Force family. I had had a heart attack six months before this move, which required a stent. Because of this, my daughter wanted me to move there with them and just be a mom to her and a nana to my grandson and my soon-to-be granddaughter.

Six weeks after arriving, on January 31, 2013, my daughter found me on the floor with no pulse. My body fluids had released due to sudden cardiac arrest. I was yellow, not breathing, and unresponsive. She immediately called the local emergency number and started CPR. Alicia was two weeks overdue with my granddaughter, so CPR was strenuous and the anxiety she experienced was awful. She calmly did this for at least a half an hour before the EMTs came.

With the arrival of the EMTs, I was defibrillated at least four different times. A Picc (peripherally inserted central catheter) line was inserted and I was airlifted to a hospital an hour away. 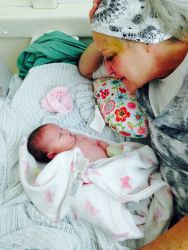 I survived and not only that, I'm enclosing a picture of the first time I saw my granddaughter. I was in the hospital because Alicia went into labor shortly after this horrible day. Alicia is a Veteran of the United States Air Force and her husband is still active service. She is my hero beyond measure.

Today I'm enjoying my grandson and my 3 1/2 year old beautiful granddaughter. There are simply no words I could write that would express the depth of my gratitude that Alicia was able to save me. I attribute that to her excellent military training.