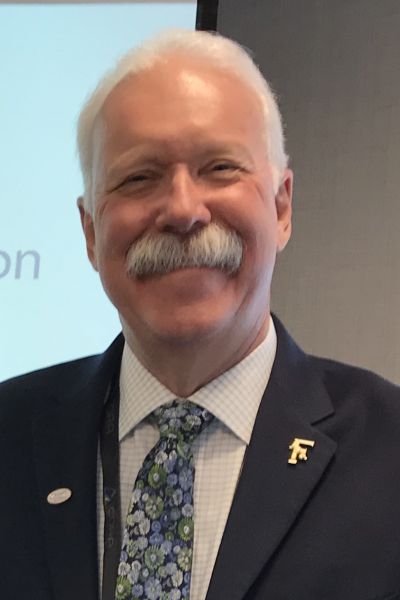 Joseph P. Farrell, PT, M App Sc, DPT, FAAOMPT, FAPTA is a survivor of Sudden Cardiac Arrest. Dr. Farrell was the co-owner/founder of a physical therapy outpatient private practice in Castro Valley, California. After 40 years of clinical practice he recently retired from patient care. He has taught extensively on the state and national levels on topics relating to Orthopaedic Manual Physical Therapy (OMPT) and served on the Kaiser Northern California Graduate PT Education OMPT Fellowship program as a senior clinical fellowship faculty member for over 30 years. He has been honored for his professional contributions on numerous occasions, including the Paris Distinguished Service Award by the Academy of Orthopaedic Physical Therapy, the American Academy of Orthopaedic Manual Physical Therapy John McMennell Service Award and the Distinguished Lecture Award, Catherine Worthingham Fellow of the APTA and recently as a Distinguished Alumnus by Northwestern University Department of Physical Therapy & Human Movement Sciences. He currently is an Assistant Clinical Professor in the School of Pharmacy and Health Professions at Creighton University in Omaha, Nebraska.

As a survivor of Sudden Cardiac Arrest and rescuer of two SCA survivors, he was chosen as a “50 for 50 Golden Anniversary Survivor Honoree” by the Citizen CPR Foundation at the Emergency Cardiovascular Care Update, San Diego, California in 2010. From 2014-2018 he served as the Co-Chair of the CPR/AED Consortium of the American Heart Association (AHA) Greater Bay Area 2020 Task Force. In 2015, the Greater Bay Area AHA honored him as the Community Health Volunteer of the Year.

Joe and his wife Edie, along with the HeartSafe committee (HSC) of the San Ramon Valley Fire Protection District have trained over 30,000 citizens in Hands-Only CPR and AED use over the past seven years. The HSC has been teaching a “Hands-Only CPR/AED” program to 7th graders (3,000 children/year) in the San Ramon Valley California school district for seven years and have recently transitioned the program to the high school level due a law change in California. His goal in his second life is to ensure that Sudden Cardiac Arrest becomes a household word throughout the USA and the world.