In Memory of Lewis 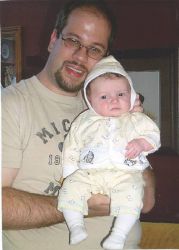 I am pleased and excited to introduce myself to the Sudden Cardiac Arrest Foundation community. I officially joined the Foundation as the vice president of development, but it holds particular meaning for me as I lost my youngest brother, Lewis, due to sudden cardiac arrest in 2014.

Lewis was always a sweet, kind, funny, brilliant boy that turned into the same type of man and father. He was 38 and perfectly healthy when he suffered his sudden cardiac arrest. He was also the father to five young children, including 14-week old twins. His wife, the paramedics and the doctors at the hospital all began working on Lewis immediately, but it took the doctors 45 minutes to restart his heart. The result was that Lewis was alive but suffering from a severe brain injury. His battle continued for almost four years. Following a bout with double pneumonia, Lewis passed away peacefully in 2014.

My goal is to help SCAF’s ongoing effort to raise awareness about sudden cardiac arrest and work to ensure other families don’t lose a loved one to this silent killer. The work the SCAF does was helpful to me when Lewis first suffered his sudden cardiac arrest and I stayed in contact throughout the years. I am so proud to be affiliated with an organization that is so dedicated to their mission. In being a part of SCAF, I can help advance our mission, while also honoring my brother’s memory. As we at SCAF work to increase awareness, we recognize that this is a monumental task and we need your support. Please consider making a donation here. Thank you for your kindness.

Have a safe and healthy December!

Happy to have someone with your experience and background on the team.

Best for the holidays!