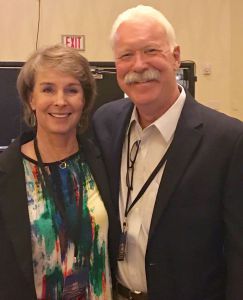 Edie and I are working hard through advocacy, teaching CPR/AED usage and education of the public to save the lives of victims of Sudden Cardiac Arrest. As you are likely aware, I survived a Sudden Cardiac Arrest (SCA) ten years ago this past August 9th.  I was fortunate to be speaking to a person at a professional get together who recognized immediately after I passed out that I was suffering from SCA. My rescuer (Matt) commenced CPR while another rescuer called 911 to alert paramedics close-by that I was in dire need for defibrillation with a AED. After 7-9 (per Edie’s recollection) shocks to establish normal cardiac rhythm, the paramedics took me to Roseville Sutter Hospital where I spent three days in intensive care comatose followed by 5 more days recovering to the point whereby my cognition returned and I underwent surgery to place an Internal Cardioverter Defibrillator (ICD) in my chest as a lifesaving device to shock my heart back into rhythm if I suffered another SCA.

According to the American Heart Association 356,500 USA citizens die of SCA yearly, which equals about 1000 deaths/day. SCA is the leading cause of death among adults over the age of 40.  By 2020, researchers report that SCA will be the leading cause of death in the world! If CPR/AED is applied quickly to SCA victim, there is a 2-3x probability of survival; if nothing is done to save the victim, there is less than an 8% chance of survival.

Edie and I are involved significantly by teaching CPR/AED usage to thousands of citizens locally with friends within the HeartSafe Committee (HSC) of the San Ramon Valley Fire District.  Additionally, I serve on the board of directors of the PulsePoint Foundation and the Sudden Cardiac Arrest Foundation (SCAF) as well as on the Advisory Board of the Via Heart Project.

The Sudden Cardiac Arrest Foundation is a national community benefit 501(c)(3) organization based in Pittsburgh, Pennsylvania that was founded in 2006. Its mission is to “raise awareness and support programs that give ordinary people the power to save a life.” They work to raise awareness about the prevention and treatment of SCA, including post-resuscitation care through research within hospitals and universities. The SCAF has a clear vision: “that survival from Sudden Cardiac Arrest can and must become the norm, rather than the exception.”

Ten years of survival from SCA is really a milestone that we would like to celebrate. Our goal is to raise $10,000 for the Sudden Cardiac Arrest Foundation by October 2019 (October is National Sudden Cardiac Arrest Awareness Month). Why $10,000?  The symbolism is simple: 1,000 citizens die/day in the USA from SCA and I have lived 10 years post SCA; thus we thought our $10,000 goal was doable and meaningful for the previously mentioned reasons.