Triathlete Survives 45 Minutes Without a Pulse

A man who could be described as the picture of health suffered a heart attack out of the blue, his heart actually stopping for 45 minutes; but miraculously, he survived. Medical personnel from Doctor's Regional Medical Center performed CPR the entire time, even when the outlook seemed bleak. 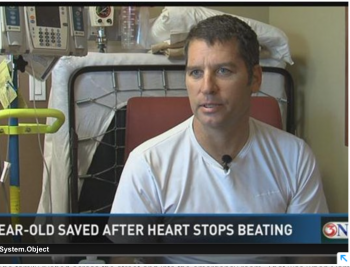 CORPUS CHRISTI, TX--46-year old Doug Commons said he did not see a light at the end of the tunnel or have an out of body experience, but his heart did stop beating for almost an hour. He and his family were at church Sunday, just two minutes from the hospital, when Commons began to sweat profusely and could not breathe.

Commons didn't know it at the time, but he was having the early stages of a heart attack.

The family rushed across the street and into the emergency room. That was when Commons went into full cardiac arrest. For 45 minutes, doctors performed CPR, his heart still not beating.

Commons is a firefighter for the Refinery Terminal Fire Company who spends his free time biking and competing in triathlons. He exercises and eats healthy, but doctors said he suffered from a widow makers heart attack.

Miraculously, he did survive, and after 20 days in a hospital bed, Commons is recovering and getting ready to return to his life at home.

Doctors said Commons is scheduled to be discharged Friday afternoon, but it all depends on how he is feeling.

Commons is healthy, but doctors said that because of a family history with heart attacks, he was at risk. They urge everyone to check their family tree and as always, try to live a healthy lifestyle.