PITTSBURGH, PA--Despite the bright sunlight starting to pop up in the eastern sky, the morning was still brisk when Sudden Cardiac Arrest Foundation volunteer techie Amanda Seagle arrived at the group’s tent at 6:10 a.m. to get ready for the Highmark Walk for a Healthy Community on Saturday, May 19. By the time other walkers and volunteers arrived for the 5K event, Amanda’s jacket was slung over a folding chair, a concession to temperatures that would rise to a pleasant mid-60's level by the time the walk began.

By 8:00 a.m., the grounds at Stage AE, adjacent to Heinz Field on Pittsburgh’s North Shore, were bustling like a tailgate party for a Steelers’ home game. Nearly 10,000 of those people, including 24 in the Foundation group dubbed “Susan’s Team,” were there to walk the 3.1 mile course to raise awareness of health issues in the Pittsburgh area.

Susan’s Team—so named by the foundation for KDKA News anchor Susan Koeppen, who suffered sudden cardiac death last November—got a lot of attention this year. Several people stopped by to try a little CPR (cardiopulmonary resuscitation) under the guidance of Brenda and Scott Frank from Start-the-Heart. Lt. Dan Elias, of Pittsburgh’s Rescue 8, one of Ms. Koeppen’s rescuers, observed that, with a little training, any one of us could save a life. That point that was later illustrated when Lt. Elias’s six-year-old daughter Delaney successfully performed the procedure on a practice dummy.

While the walk was going on, Foundation board chairman Dr. Norm Abramson, an expert in cardiac arrest research, fielded dozens of questions about sudden unexpected cardiac death and how victims can be revived and go on to lead normal, active lives. 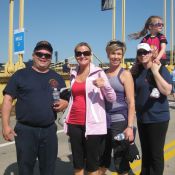 Most of the Foundation team arrived back at the tent an hour or so after the 9:10 a.m. start time, smiling and not visibly worse for wear, and pleased with the turnout and the beautiful morning Mother Nature provided for this important event.

A Channel 2 camera operator was at the finish line to greet Ms. Koeppen, her friend Beth Sutton, Lt. Elias, Ms. Seagle, Foundation president Mary Newman, and the rest of the team for interviews and comments. (Ms. Sutton was jogging with Susan when she suffered her cardiac arrest.) A feature on the Highmark walk and Susan’s Team ran on KDKA’s 11 o’clock news that evening.

"It took six months, but we finally finished our walk," said Sutton. "Thank you for saving my friend," she added, giving Lt. Elias a hug. 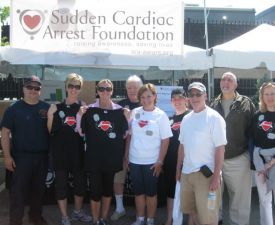 After the walkers’ returned to the tent, with Pirate Pierogies greeting passersby and the air filled with rock and country music provided by a live band, Susan’s Team gathered in front of the tent, posing for team photos and high-fiving and congratulating each other on a successful walk that will provide funds to help raise awareness of the stunning number of sudden cardiac arrest incidents (about 382,500 annually) and the thousands more lives that could be saved with CPR and automated external defibrillators (AEDs).

Donations for this year’s walk are still being tabulated and more donations are expected through June 30, the deadline for donations for the 2012 walk, but Ms. Newman is optimistic that “We will surpass last year’s individual donations by a healthy margin.” She based that projection on the fact that the two dozen walkers and even more “virtual walkers” were about double last year’s total.

The organization’s president attributes a large part of that increase to the efforts of an expanded volunteer staff and increased exposure. 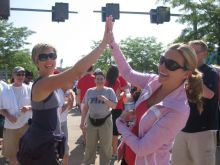 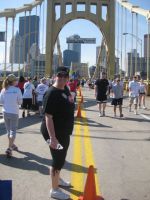 “We were fortunate to have Amanda and Kayla (Criswell) as volunteer team coordinators,” she said, “and Susan’s participation really helped raise awareness of the issue.”

The Sudden Cardiac Arrest Foundation will receive 100% of the funds donated for their team.

Dr. Abramson agrees with Ms. Newman’s optimism saying, “We had a great turnout,” and adding that, in addition to the financial success of the walk, the Foundation got “good exposure because of the enthusiastic participation of people interested in saving lives.”

Donations to the Sudden Cardiac Arrest Foundation’s walk team may be made here, now through June 30. The individual or group that raises the most for the Foundation will receive an AED, donated by Cardiac Science.