BETHESDA, MD -- The first meeting of a ‘National Cardiac Arrest Collaborative’ took place on May 11th at the National Institutes of Health (NIH). The purpose of creating a formal collaborative is to unify the cardiac arrest field, identify common goals, build momentum, and ultimately improve survival from cardiac arrest with good neurologic and functional outcomes.

The meeting was a follow up to a workshop conducted in July 2016 in Washington, D.C., that explored recommendations of an Institute of Medicine (IOM) report on improving survival from out-of-hospital cardiac arrest. Among other things, the IOM report called for fostering a culture of action by improving public awareness and training, and creating a national cardiac arrest collaborative.

According to the IOM report, sudden cardiac arrest is the third leading cause of death in the U.S. The latest statistics from the American Heart Association indicate that cardiac arrest affects 356,500 people annually outside hospitals and nearly 90 percent of events are fatal.

Richard Bradley, MD, of the University of Texas Health Science Center and member of the American Red Cross Scientific Advisory Council, and Clif Callaway, MD, of the University of Pittsburgh and chair of the AHA Emergency Cardiovascular Care Committee, were designated co-chairs of the steering committee of the new collaborative. A representative of the U.S. Department of Health and Human Services will also be named as a co-chair of the Steering Committee. Drs. Aufderheide and Becker will serve on the steering committee along with Lana Gent of the AHA, Jonathan Epstein of the ARC and Jeremy Brown of the NIH. The leadership envisions including several government agencies and appointing industry representatives to an external advisory committee. 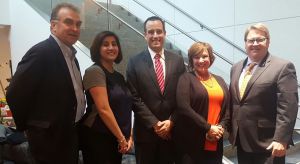 “We were honored to be invited to the foundational meeting of the ‘National Cardiac Arrest Collaborative,’” said Mary M. Newman, MS, president of the Sudden Cardiac Arrest Foundation. “We appreciate having the opportunity to have several seats at the table, provide our insights on public awareness about sudden cardiac arrest, and share personal stories of survival.”

Other Sudden Cardiac Arrest Foundation representatives at the meeting included board members Carissa Caramanis, a social media expert; Robert Davis, a communications director at the U.S Department of Justice; Martin Gannon, a financial advisor; and volunteer, Matt Strauss, who works in law enforcement. Davis, a former reporter for USA Today, presented information on crystallizing messaging to promote public awareness at the IOM meeting last July. Gannon and Strauss described their shared real-world experience at the May 11th meeting: Strauss saved Gannon’s life in 2003 when he was a 17-year-old high school student.