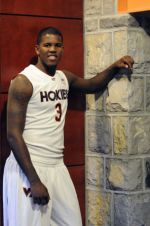 After being relegated to the sidelines for more than two years, former Virginia Tech forward Allan Chaney is finally getting another chance to play college basketball. High Point confirmed Wednesday that Chaney has been cleared by school doctors and will join its men’s basketball team for his final year of eligibility in 2012-13.

Chaney will become the only player in Division I college basketball next year with a defibrillator in his chest. Back in April 2010, he collapsed during a workout in Blacksburg and doctors later diagnosed him with viral myocarditis, an inflammation of the heart that can be fatal.

Last August, Virginia Tech announced it would not be able to medically clear Chaney because of the risks associated with the virus. He never did play in a game for the Hokies after transferring from Florida in May 2009, but during this 27-month ordeal, Chaney refused to give up on his basketball dreams.

“I knew there would be somebody that would clear me. I knew it would happen for me,” an excited Chaney said Wednesday evening. “It’s unbelievable that two years ago I was in an awful situation, real bad situation, and now it’s kind of like the light is shining on me now. I’m very happy, very fortunate.”

Chaney had a backup defibrillator installed in his chest last November by University of Pennsylvania cardiologist Francis Marchlinski for insurance purposes. Marchlinski then cleared Chaney to resume basketball activities again in May, but the 6-9 Baltimore native still needed a school to grant him medical clearance.

High Point Coach Scott Cherry, a former assistant at George Mason under Jim Larranaga, first approached Chaney in June after talking with friends in coaching circles when a scholarship opened up late in the offseason. Cherry has only watched Chaney play on video, however.

“We do our research with any kid that we’re recruiting, but because of this situation, we had to obviously check some more,” said Cherry, who added he spoke with Virginia Tech officials and Marchlinski about Chaney’s heart ailment. “We had to do our due diligence on our end as far as getting information to the proper people, our medical training staff, doctors here, to have them review it to see what they thought. Everything that we did and every step that we took along that process, everything came back headed in the right direction.

“He’s extremely talented, and yes, there’s the question marks. But we’re willing to get him here and see how he does for us. I think he’s gonna have a tremendous career for us.”

Chaney will likely wear a vest or pad over his heart during games, Cherry said. Chaney was considered top-100 recruit in the country coming out of high school in 2008 and his multi-dimensional skill set should provide an instant jolt to High Point, which went 13-18 as part of the Big South last season.

There’s also a chance Chaney, who graduated from Virginia Tech with a degree in apparel, housing and resource management in June, could receive a waiver from the NCAA and gain an additional year of eligibility. Currently, he will be classified as a redshirt senior and attend graduate school at High Point.

“Anybody that knows the way I play, I can shoot the three. I can handle the ball. I can do a little bit of everything, and I’m not scared to bang with anybody inside,” said Chaney, who averaged three points and 2.1 rebounds per game as a freshman at Florida during the 2008-09 season. His goals are to lead the country in rebounding and average “four or five assists” per game.

Cherry equated Chaney’s return to riding a bicycle, because “you don’t lose that talent.” The immediate challenge for Chaney will be returning to top shape, although he has spent the summer working out in Baltimore and Blacksburg.

But at this point, Chaney is simply relieved to be talking about basketball again instead of doctor’s records.

“I’m just happy I found a school,” Chaney said. “And not only finding a school that will clear me, but one where they’re just as excited to have me there as I am about having the opportunity to play there.”