Men Bonded by Near Tragedy, Credit AED in Church Gym for Saving a Life

Just after starting to play a basketball game this particular morning, play stopped because there was apparently some type of injury on the adjacent court. My initial thought was that somebody had rolled their ankle or injured their knee.  As some of us gathered around this player/friend named Matt Krueger, we quickly determined that he was not suffering an injury from a game, and 9-1-1 was being contacted.

With Matt being somewhat conscious and speaking softly, his breathing seemed to be very shallow. I knelt down beside him, held his hand and tried to speak with him in an attempt to have him stay conscious by reassuring him that help was coming and he was going to be alright.

Moments later he slipped into unconsciousness as his breathing ceased and his condition deteriorated further.

In the chaotic moments that ensued, I realized the gym’s AED was taken off the wall by my friend Tim Sjostrom, and brought over to me. Fortunately, Tim had the awareness to somehow recall that Matt had heart issues in the past.  My friend Demetrio Torres was now kneeling in front of me and had placed a plastic CPR mask over Matt's mouth to administer artificial respiration, while two other gentlemen, Mike Stoner and Marco Hernandez, were kneeling on the other side of Matt taking turns administering CPR chest compressions. 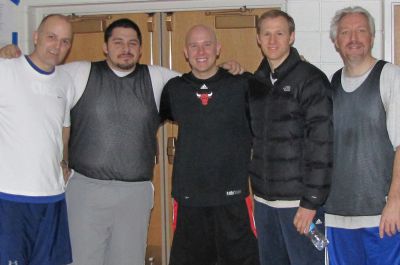 As the magnitude of the situation intensified, it became increasingly apparent that Matt was suffering some type of sudden cardiac event. As Demetrio, Marco and Mike continued to administer CPR, I struggled to clearly think and understand the directions spoken by the AED. I'd gone through a CPR/AED training course years prior and knew the general idea of how to operate the machine, but in this traumatic and unnerving moment it was very difficult to think clearly. I got the packet off the back of the machine that contained the two sensor pads. Demetrio positioned the first pad on Matt’s chest and I applied the second pad on his left side. The AED then quickly began to assess Matt’s condition. It instructed us to not touch Matt as it continued its assessment.

At this point, there was no doubt in my mind that Matt's heart may have stopped beating and the next words that were going to be uttered by the AED was going to advise us to administer an electrical defibrillation shock. When the AED said, “Shock advised. Stand clear of the patient,” I pressed the button to administer the shock.

Miraculously, within moments, Matt began to breathe on his own and regain consciousness. His eyes opened and he began to speak to us.

Matt underwent triple bypass surgery within a week. I'm so happy to also inform you that his surgery was a success. He was discharged from the hospital ahead of schedule and we have recently passed the one year anniversary of this life changing event. To mark this incredible milestone, Matt once again returned to the gym to thank us and even played a couple of games with us!

I have little doubt that successful administration of life-saving CPR and utilizing an AED, saved Matt’s life. That fact became abundantly clear to me as I've gone over this scenario in my head time and time again in the days, weeks and months that have followed.

So many people took action for Matt. How and why I ended up being there as we attempted to do something to prevent the unthinkable from occurring right in front of us is a question I'll never fully grasp.