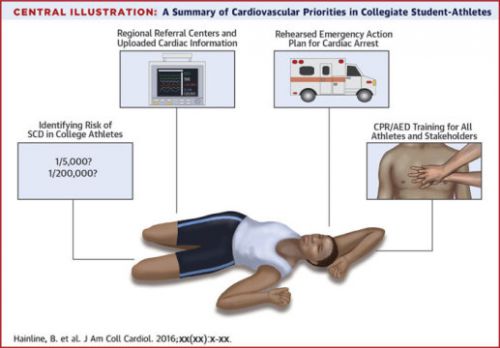 The Journal of the American College of Cardiology today published a consensus statement that establishes guidance for conducting pre-participation screenings of college athletes and encourages emergency action plans for quickly responding to sudden cardiac arrest. The statement was developed by a 29-person task force convened by the NCAA in September 2014. Task force members included multidisciplinary physician specialists and athletic trainers representing national sports and medical associations, including the American College of Cardiology.

Sudden cardiac death is the most common nontraumatic cause of death among college athletes, and 75 percent of college student-athlete deaths occur during sports and exercise. The NCAA currently requires every student-athlete to undergo a pre-participation evaluation conducted by a licensed medical doctor or doctor of osteopathic medicine prior to participation in any sport it sponsors. However, the purpose of that pre-participation evaluation is not defined, nor is it required to be conducted or reviewed by a team physician.

The NCAA-convened task force addressed concerns over cardiovascular care for student-athletes, such as how to conduct pre-participation screenings, and reached a consensus on recommendations across disciplines for approaching the identification of cardiovascular conditions and responding to unanticipated cardiac events in athletics venues.

"The interassociation statement, developed and endorsed by leading national medical and sports medicine organizations, is the result of an exceptional collaborative effort and will serve as a meaningful resource for our member schools in support of the cardiac health of college athletes," said Brian Hainline, M.D., lead author of the study and NCAA chief medical officer.

The task force noted that the common element of screening objectives is to identify potentially life-threatening conditions for which participation in competitive sports would place an athlete at an elevated level of risk.

The American College of Cardiology and the American Heart Association both recommend taking an athlete's family history using the AHA's 14-point questionnaire and conducting a physical examination to determine the athlete's risk of cardiovascular disease before the athlete participates in sports. Routine, large-scale use of electrocardiograms is not recommended by either the ACC or the AHA. However, the consensus statement acknowledges that NCAA-member institutions that have the ability to conduct ECGs on all athletes are already doing so. It outlines specific guidance for conducting ECGs in an entire student-athlete population, including the guidance that only physicians trained according to ACC/AHA/Heart Rhythm Society recommendations should be conducting the ECGs.

The field of sports cardiology is a highly specialized segment of cardiology and very few physicians and institutions across the country have the knowledge base, skill and experience in this discipline to accurately interpret an athlete's ECG. This could put smaller colleges and universities located in low-density population areas at a disadvantage when it comes to accessing expertise in sports cardiology. The task force recommended establishing regional referral centers that can provide pre-participation ECG interpretation, clarity on the cardiovascular status of athletes with irregular findings during their pre-participation screening, evaluations of new cardiovascular symptoms that develop during training or competition, and consultations on when a player with a cardiac issue is cleared to play.

A major finding of the task force was the need to streamline how cardiac arrest in student-athletes is recognized and responded to. It was recommended that all universities have a written emergency action plan for treatment of cardiac arrest that is well-rehearsed, with different protocol for treatment during a practice versus during a game/championship event since treatment during a game can be vastly different due to traffic delays and access problems for emergency medical services.

The consensus statement is being co-published in the British Journal of Sports Medicine and the April issue of the Journal of Athletic Training.