The Serious Fright Lurking in Our Communities 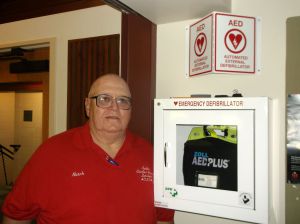 When we think of October, Halloween typically comes to mind; when dressed as monsters, ghosts and goblins, we take delight in spooky costumes and scaring others. Sadly, there’s a serious, legitimate fright lurking within our community every month of the year that strikes out-of-the-blue, but wears no disguise. Most of us don’t know about the threat of sudden cardiac arrest (SCA).

SCA is an electrical disruption of the heart’s normal rhythm. It is not the same as a heart attack. The only way to survive SCA is with CPR and shocks administered from an automated external defibrillator (AED).

Think SCA is just another medical condition in a universe filled with a plethora of health problems? The numbers simply prove otherwise. Nearly 300,000 lives lost each year; close to 1,000 each day. More than breast, lung and colon cancer and HIV/aids combined. The heart abruptly stopping somehow rings a more alarming tone than runny noses or restless legs.

Think SCA won’t happen to you or someone you know? So did the thousands of family members who lost loved ones to SCA this year alone. As busy and overwhelmed as we all are trying to make it through each day, it’s easier and perhaps more comforting not to focus on a direct connection with SCA.

Think SCA only happens to older, unhealthy people? The faces of survivors and those lost to SCA show a different picture. It’s estimated that 6,500 young people experience SCA each year. In general, the heart can abruptly stop functioning in a young person as equally in an old; male or female; athletic or physically unfit.

Think somebody will always be there to provide help? The national SCA survival rate is only 7-10 percent for a reason. Most often, SCA occurrences are not witnessed, or bystanders do not intervene out of fear or the assumption that someone else will help. For people in rural areas, the numbers are even worse since emergency medical response may not arrive in time.

Currently, 38 states have a law requiring CPR training in order to graduate from high school. We still need help from the public to address this health crisis.

October is National SCA Awareness Month and we can take small steps to better prepare and respond to SCA. First and foremost, start at home by removing fear, apathy and blinders preventing you from understanding the very real threat of SCA. The heart abruptly stopping is scary, but how we prepare and respond to it does not have to be. Expanded public consciousness and bystander intervention are critical not just in October but all year long. Remember ... (nearly 70) percent of sudden cardiac arrests happen in the home. This means there is a greater chance that if you ever have to do CPR, it will be on a family member and not a stranger.

-By Butch and Susie Gibbs, RN, EMT, Humeston, Iowa. Originally published as a Letter to the Editor in Osceola Sentinel-Tribune entitled "October Is SCA Awareness Month"