Survivors and Legislators Call for CPR Training in Pennsylvania Schools

HARRISBURG, PA--The American Heart Association (AHA) held a press conference Monday in the Main Rotunda as part of their annual lobby day. Speakers called for a vote on SB 521 or companion legislation HB 921, which would require every high school student in Pennsylvania to receive training in hands-only cardiopulmonary resuscitation (CPR) before graduation. 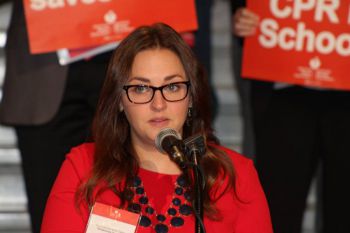 Amy Cavaliere, AHA volunteer, said she is a survivor of sudden cardiac arrest and AHA is a leader in hands-only CPR training. Most often, the first responder is not an emergency medical professional, but a lay bystander. Unfortunately, however, many individuals still do not know how to administer CPR, she said.

“To save more lives, we need to train more people in CPR,” Cavaliere stated, adding that ensuring high school students receive training is a common sense approach already passed in 38 states. She said she is “upset and embarrassed” with Pennsylvania lagging behind in this training, but is pleased that SB 521 is pending third consideration on the Senate calendar.

Sen. Thomas Killion (R-Delaware), prime sponsor of SB 521, agreed CPR saves lives and said the bill would create “an army of students” to be there to administer CPR. He called for Pennsylvania to join the 38 other states with similar laws.

Rep. Stephen Barrar (R-Delaware), prime sponsor of HB 921, said training students in CPR would create real-life superheroes equipped with the ability to administer CPR correctly. He said at family gatherings if someone collapses it is “the worst feeling in the world” to not know what to do, and if CPR can be instilled in students, it will save lives and boost education.

Paul Newiadomy, lieutenant with First Aid and Safety Patrol of Lebanon EMS, described his experience as a volunteer--and a cardiac arrest survivor. He focused on how hands-only CPR is easy to administer until help arrives, and everyone should know the technique, as his family did. He suffered sudden cardiac arrest while helping his daughter move, and his wife administered CPR until EMS arrived to take over and transport him to a hospital. Newiadomy said CPR can be administered by anyone who takes the time to be trained. He also described other cardiac arrest cases he had seen in his EMS role, in which patients survived, thanks to bystander CPR. He closed by describing the bills as a good “first step” to save lives and train bystanders and called for moving the bill in the Senate.

Cavaliere said lawmakers have the ability to add thousands of trained bystanders into the community through this legislation. “We’ve waited long enough, now is the time to pass this bill,” she closed.