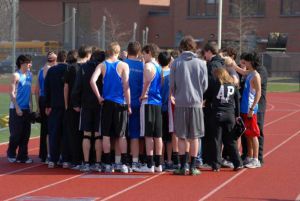 HARTFORD, CT--Andy Pena, a swimmer and track athlete at Darien High School, was one of thousands of children who die each year from sudden cardiac arrest.

His undiagnosed heart ailment could have easily been spotted by a routine cardiac test. Instead, while training on a treadmill to prepare for a personal best in the mile, he fainted and never revived. It was later determined he died of sudden cardiac arrest -- the No. 1 killer of young athletes.

The tragic death in a Boston hotel was felt all the way back home.

Now, his father, Victor Pena, has persuaded legislative leaders to raise awareness and provide training for parents and coaches to spot the warning signs, including rapid heart beat and difficulty breathing.

Victor Pena, who founded the Andy Smiles Forever Foundation with his wife, Giovanna, wants to spread knowledge of training procedures, including cardiopulmonary resuscitation, that can save as many as four out of 10 stricken with SCA.

"While we may believe that sudden cardiac arrest mostly afflicts adults, we are seeing more news about teens and young adults dying from this, and we can no longer be complacent," Pena told the legislative Children's Committee.

The bill would require parents and coaches to sign informed-consent applications showing they understand warning signs for SCA; and that coaches annually brush up by watching 10-minute videos.

Coaches already get annual CPR and defibrillator certifications, although most schools do not have the $1,500 heart restarters.

"As parents who lost a child to sudden cardiac arrest, it is very difficult for my wife and me to know that the outcome may have been very different if we had known about the science of sudden cardiac arrest, if someone had performed CPR and used (automated external defibrillator) on Andy immediately after he collapsed," Pena said. "We do not want other families to suffer the same fate of this unspeakable, unthinkable outcome of losing a child."

Another Darien resident, Vicki O'Rourke, said that Pennsylvania and New Jersey have passed similar legislation, and it is pending in seven other states.

O'Rourke stressed the need to remove athletes from games and practices if they display SCA symptoms.

The Sudden Cardiac Arrest Foundation says that a lack of reporting makes it difficult to pinpoint SCA incidents. The American Heart Association recently published a study indicating that emergency medical personnel reported 9,500 cases of out-of-hospital cardiac arrest in 2013. The foundation says other experts estimate that fewer than 1,000 children suffer sudden cardiac arrest annually. According to the National Collegiate Athletic Association, there is one SCA death per 22,903 athletes age 17 to 24 in collegiate sports.

Rep. Terrie Wood, R-Darien, a member of the committee, recalled that freshman Andy Pena's death shocked Darien High School, where her son was a senior at the time.

"It was very upsetting to him," Wood said, fighting back tears. "And the school totally galvanized behind you."

"The whole goal is to make sure that parents know what the symptoms are," Leone said in a noontime news conference with Pena, O'Rourke, Looney and Duff.

"We know that time is of the essence when something like this happens," Looney said.