CPR Could Be Added to the UK National School Curriculum 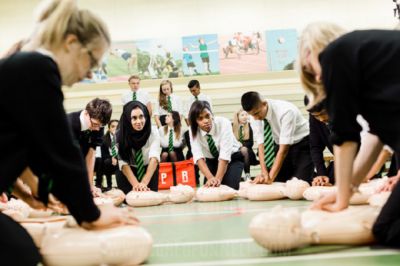 LONDON--In a landmark move, the UK government has today revealed plans to add CPR to the national curriculum.

The historic announcement sees CPR and first aid added to the curriculum as part of wider Health Education classes. The move could transform survival rates from out of hospital cardiac arrests, potentially saving thousands of lives.

Survival rates for out of hospital cardiac arrests are shockingly low, with less than 1 in 10 surviving.

Research funded by the BHF found that people were nearly three times more likely to perform CPR if they had received training.

The announcement follows years of tireless campaigning to get first aid and CPR onto the curriculum - along with BHF partners St John Ambulance and British Red Cross, as part of the Every Child a Lifesaver coalition.

“Adding CPR to the curriculum in England will mark a defining moment in improving the UK’s shockingly low survival rates from cardiac arrests,” said Gillespie. “The government’s announcement sends a clear message that they are committed to empowering young people with life-saving skills they will take in to adulthood. This historic move will transform cardiac arrest survival rates in the years to come.”

A public consultation on the updated guidelines has been launched today, which will allow members of the public to comment on the plans before they are finalized.

Show your support for adding CPR to the curriculum.