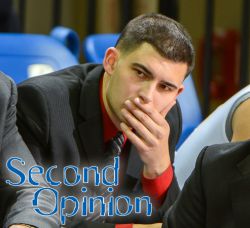 HAMDEN, CT and PITTSBURGH, PA – Quinnipiac Men's Basketball Director of Operations Mike Papale, along with his mother Joan Papale, will be interviewed for the television show Second Opinion on June 12 at a studio in downtown Rochester, NY, to discuss sudden cardiac arrest and help raise awareness by sharing his story. The Sudden Cardiac Arrest Foundation facilitated the connection between Papale and Second Opinion.

"It is an honor that the Sudden Cardiac Arrest Foundation and Fiona Willis reached out to my mother and me to be on Second Opinion," said Papale. "Since 2006, it has been our goal to help raise awareness about sudden cardiac arrest and to save lives. Being on this show and sharing our story will give us another opportunity to do that."

The Sudden Cardiac Arrest Foundation maintains a database of survivors from across the U.S. who are willing to speak with the media to "pay it forward" and help save other lives.

“In developing the episode, we wanted to make sure we found the right patient to tell the story of sudden cardiac arrest in young athletes--one that emphasized the importance of quick action in the Chain of Survival," said Willis, executive producer of Second Opinion. "We also wanted to share a story of hope. The Papale family has taken a incomprehensibly terrible event in their lives and turned it into a way to reach countless families and instill hope in so many people. I’m so grateful that the Sudden Cardiac Arrest Foundation was just a phone call away and was able to put me in touch with Mike Papale and his mom, Joan.”

Papale, who just finished his third season at Quinnipiac, suffers from a hereditary condition called hypertrophic cardiomyopathy, or HCM, which affects the heart muscle. He first became aware of the condition back in August of 2006, when he went into cardiac arrest while training at the Wallingford Parks & Recreation Center. (Read Mike's story here. Read Joan's story here. Read his rescuer, Bob Huebner's story here.)

Papale underwent an operation to implant a combined pacemaker and defibrillator, a specialized device designed to directly treat a cardiac tachydysrhythmia.

Scare struck again for Papale in October 2014, when there was swelling and redness on his device. That was followed by high fever and chills and knowing immediately that something wasn't quite right. Papale's doctor discovered a bacterial infection on his implanted defibrillator that needed to be removed and sterilized. Unfortunately, the scar tissue started bleeding during the procedure and this required emergency open-heart surgery to stop the bleeding and detach the device. After 12 hours of surgery, the device was successfully removed and Papale was given a ZOLL Live Vest, which acts as a personal defibrillator. He used this, along with Picc Line to deliver an antibiotic for six weeks, before a final surgery to install a Subcutaneous Implantable Defibrillator.

Seen on public television stations across the country, Second Opinion is now in its 12th season. Papale's segment will likely air sometime this fall.

Sudden cardiac arrest (SCA) is a leading cause of death among adults over the age of 40 in the United States and other countries. In the U.S. alone, approximately 326,200 people of all ages experience EMS-assessed out-of-hospital non-traumatic SCA each year and nine out of 10 victims die. In fact, the number of people who die each year from SCA is roughly equivalent to the number who die from Alzheimer's disease, assault with firearms, breast cancer, cervical cancer, colorectal cancer, diabetes, HIV, house fires, motor vehicle accidents, prostate cancer and suicides combined. SCA is a life-threatening condition--but it can be treated successfully through early intervention with cardiopulmonary resuscitation (CPR), defibrillation, advanced cardiac life support, and mild therapeutic hypothermia. When bystanders intervene by giving CPR and using automated external defibrillators (AEDs) before EMS arrives, four out of 10 victims survive. (SOURCE: www.sca-aware.org)

About the Sudden Cardiac Arrest Foundation

The Sudden Cardiac Arrest Foundation is a national community benefit 501(c)(3) organization dedicated to raising awareness about sudden cardiac arrest and saving lives. Programs include educational campaigns for secondary schools and colleges and the Sudden Cardiac Arrest Network, an online community that provides peer support and opportunities for survivors and family members to participate in awareness, advocacy, and research initiatives. Media interested in connecting with survivor spokespersons are welcome to contact the Foundation at media [at] sca-aware.org.

The goal of Second Opinion is to promote good health, improve doctor/patient communication and empower viewers to take charge of their own healthcare, and in turn, help them navigate the medical system for better health outcomes. Host Dr. Peter Salgo engages a panel of medical professionals and patients on a multitude of health topics to raise awareness and educate viewers on these matters.