Sudden Cardiac Arrest: It's Not A Heart Attack

The original article was published by Media Planet in the Future of Personal Health here and distributed in the March 25 edition of USA Today.

Sudden Cardiac Arrest is not the same as a heart attack, but the two conditions can be related. Andy Graber survived both.

Most Americans mistakenly believe that sudden cardiac arrest (SCA) and a heart attack are the same.[1] If more people understood the difference, thousands of lives could be saved each year. Andy Graber’s story can help illustrate the difference—he survived both.

Classic symptoms of a heart attack

Graber was alone in his home in Joppa, Maryland, when he experienced the classic signs of a heart attack: “I had severe pain in my left side, dry heaves, a migraine, chest pains and was hardly able to dial 911.”

A heart attack is caused by a blockage that disrupts blood flow to the heart muscle, causing a part of the muscle to die. Symptoms include chest pain, shortness of breath, nausea, and sweating. The victim usually remains conscious since the heart continues to beat during a heart attack.

Luckily, Graber was able to call for help. He was rushed to the hospital and received two stents (metal or fabric mesh tubes used to prop open arteries) to restore vital blood flow. The procedure saved Graber’s life, but the heart attack caused damage to his heart muscle and put him at risk for another serious heart condition called sudden cardiac arrest.

Sudden cardiac arrest occurs when a sudden electrical malfunction causes the heart to beat so rapidly that it cannot circulate blood, often just quivering with no true beats at all. During sudden cardiac arrest, the heart can no longer supply enough blood to the body to sustain life.

While there are many causes of SCA, including underlying heart rhythm disorders, one of the most common risk factors is a recent heart attack. The dead muscle from a heart attack can disrupt the heart’s natural electrical system and lead to SCA.

More than 1.5 million Americans will have a heart attack this year.[2] Many will be unaware that their heart attack increases the risk of SCA, and this risk is highest in the first 30 days.[3]

An SCA victim usually loses consciousness almost immediately, unlike someone who experiences a heart attack. The victim typically passes out so quickly that he doesn’t realize what’s happening. Starting CPR immediately can buy time, but the only way to reset the heart’s normal rhythm is to use a defibrillator. Time is of the essence: the chances of survival decrease 10 percent with each minute that passes after SCA occurs.[4] 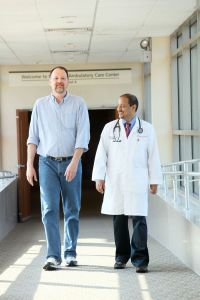 “There have been a lot of improvements in how we treat patients with heart problems,” says Dr. Vivek Dhruva, Graber’s cardiologist from the University of Maryland Upper Chesapeake Health. One such advancement is a wearable defibrillator, a device that continually monitors the patient’s heart and delivers a lifesaving treatment shock to restore normal heart rhythm if needed.

Graber’s heart was pumping at less than a quarter of its normal strength after his heart attack and Dr. Dhruva determined he was at risk for SCA. He prescribed the LifeVest wearable defibrillator to protect Graber after he was discharged from the hospital.

Three days later, in the early hours of the morning in his home, Graber suffered SCA without warning. He was automatically shocked by the wearable defibrillator, which returned his heart to a normal rhythm and saved his life.

Later that evening, he suffered another cardiac arrest in the hospital. Like most victims, Graber lost consciousness in a split-second. “I remember trying to say, ‘you better get the nurse,’ but those words never left my lips.” Again, a treatment shock from the wearable defibrillator restored Graber’s normal heart rhythm.

Hope for the future

Sudden cardiac arrest is unpredictable. However, recent heart attack victims can be protected proactively. The wearable defibrillator is now protecting tens of thousands of people every day.

“I think about all the things I like to do in my life, and I almost lost all of it,” Graber reflects. “My doctors saved my life.”

If you or a loved one suffers a heart attack, it’s important to talk to your doctor about your risk of sudden cardiac arrest and to learn more about options to provide protection if your risk is high.

The original article was published by Media Planet in the Future of Personal Health here and distributed in the March 25 edition of USA Today.