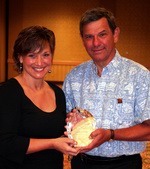 “The People Saving People™ Award is an effort to recognize the critical importance of bystander action in cases of sudden cardiac death,” said Mary Newman, SCA Foundation president, who presented the award to David Belkin, on behalf of his hero, Roman Matlaga. “It is an honor to recognize Roman Matlaga with this award. As the engraving on the award says, quoting from an old Jewish proverb, ‘To save one life is as if you have saved the world.’”

During the presentation, Belkin shared his experience, giving tribute to his rescuers and relaying a message from his daughter, Emily, who called with Father’s Day wishes earlier that morning. “Tell everyone there thank you for all they do to teach people how to save lives.”

Gibbs saved the life of her husband, Butch, when he collapsed during a community theatre performance. She gave CPR and used the AED that she had previously acquired for the local rescue squad through grants provided by the Rural AED Act. Read More

Roman Matlaga played basketball on Sunday mornings at the Lakeside Elementary School in Honesdale, Penn., for 15 years. This particular Sunday morning—February 18, 2007—he was joined by some of the regulars and first-timer, David Belkin, 65, of Bethesda, MD. They had been playing for quite awhile that morning and Matlaga was not in a good mood. He had just lost a game and was sitting on the bench. That’s when Belkin took an amazing “fade away” and got the basket.

“I was shocked to see it went right in. I’ve never seen anything like it and probably never will again,” said Matlaga. “But I was not as shocked as David was about to be.”

Right after taking the shot, Belkin stumbled backwards into the stands.

That’s when Matlaga leapt from the bench into action. “It was clearly sudden death,” he said. “David was blue, ashen and had the look of impending death. That look is unmistakable.” Matlaga, an emergency physician, took charge of the scene.

“When you’re in the hospital it’s a controlled situation. You have everything you need close at hand,” said Matlaga. “It’s a different beast in the field. We immediately went into action, taking care of the ABC’s (airway, breathing, circulation). I started CPR and another player helped with rescue breathing. A third player left to see whether there was an AED (automated external defibrillator) nearby. It was a total team effort.”

Next door to the gym, a church was having Sunday services. One of the players burst on the scene, asking if there was AED in the school. Fortunately, thanks to the school administration’s foresight, an AED was close by and it was retrieved quickly. The members of the congregation, about 100 people, immediately started praying for Belkin.

After one shock, he was back. “David was awake by the time the medics arrived,” said Matlaga. “And EMS got there quickly.”

“It was amazing to all of us to see a dead man wake up,” said Matlaga. “That rarely happens in the hospital, even under the best conditions,” he said. “Frankly, this was about as good as it gets. You’ve got to think there was a greater power above helping us.”

As for Belkin, his first comment after ‘coming to’ was “Did we win?”

Yes, David, you won. And your family won. And now you will get to spend another Father ’s Day with your wife, children and grandchildren.

Anyone can save a life

What about the fact that Matlaga is an emergency physician? What is the message for laypersons who may witness sudden cardiac death? “Anyone can save a life,” said Matlaga. “All it takes is the courage to take action.”

What’s more, he said, “We all need to be prepared. You never know when something like this will happen. It’s critical to have AEDs in strategic locations and have regular updates on how to use them. Without the AED, I’m not sure David would have made it.”

Matlaga’s message: “Placing AEDs in schools is a no-brainer. We pay for gas, we pay for books. We pay for fire extinguishers to save property—we should pay for AEDs to save lives. What could be more important? AED placement in schools should be mandatory.”

“I was fortunate that someone had the courage and initiative to intervene and help another human being,” said Belkin. “If it were not for Roman, I may not have come back from my near-death experience.”

Gregory’s legacy and the wisdom of school leaders

Why did Lakeside Elementary have an AED on site when many high schools and colleges in the U.S. still lack this basic lifesaving equipment? Every ‘save’ starts with a community champion. In this case, it was Rachel Moyer, who became an advocate for AED placement in schools after her son Gregory, then 15, collapsed in sudden cardiac death while playing basketball at a school near Lakeside in December 2000. Moyer later became instrumental in getting legislation passed that provided two free AEDs to every school district in Pennsylvania.

In the Wayne Highlands School District, the two free ones went to Honesdale High School. But Superintendent Paul Edwards (retired) and then Assistant Superintendent Tom Jenkins went above and beyond and saw to it that all school buildings and athletic trainers in the district have AEDs, training, and emergency response plans.

“We have a lot going on every day—and every night—in our schools,” said Jenkins, who now serves as superintendent. “If someone ever needed an AED and we did not have one—well, that would be a terrible thing.”

“When my family heard the news of David’s save, we were elated,” said Moyer. “This was living proof that AEDs are needed in all schools. We knew we had chosen the right path—keeping Greg’s memory alive by placing AEDs in schools and other public places.”