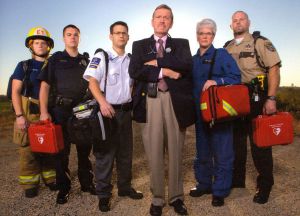 ROCHESTER, MN--Just about all of us have lost a friend or loved one to (cardiac arrest).

Now a certain U.S. city has developed a rapid action plan to save lives when the human heart goes into crisis and they are encouraging other cities to do the same.

When a late spring snowstorm hit Minnesota in May, 72-year-old Army Veteran Ron Kath went out to shovel his driveway like he always does, but this time he collapsed.

Police got to him first.

Ron’s wife Paula said the police knew just what to do even before paramedics arrived.

They used a defibrillator to shock him back to life.

Ron is lucky to live in Rochester, the city with the country’s highest survival rate for people who suffer cardiac arrest outside the hospital, 58 percent.

The city credits one man for this high survival rate.

Dr. Roger White, from the Mayo Clinic--a member of the SCA Foundation Advisory Council--pioneered a program starting in 1990 putting automated external defibrillators, AEDs, in every police car and other first responder vehicle in Rochester, Minnesota.

He said he wanted to see if survival rates would increase if police were equipped to shock patients back to life within the critical first four to six minutes of an incident, the moments before an ambulance might arrive.

Dr. White said the time between collapse and defibrillation is critical to survival.

He keeps track of every cardiac arrest case in the city.

“That’s been the hallmark of this program, not just to do it, but to analyze everything you do,” he said.