Promising Technology Could Turn Laptops and Tablets into AEDs

The invention relates to a kit for adapting common laptop and tablet computers to enable each to be used as an automated external defibrillator (AED) to treat victims of sudden cardiac arrest. 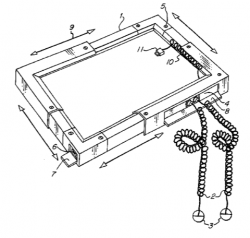 BOCA RATON, FL-- BABRIC Life Science Innovations (tm) has announced that the startup medical technology company has been issued a U.S. patent detailing a kit for retrofitting a computer with a portable external defibrillator. The technology aims to adapt the common laptop and tablet computer to enable each to be used as an automated external defibrillator (AED) for treating victims of sudden cardiac arrest (SCA).

SCA affects about 1,000 people outside hospitals each day in the U.S., according to the American Heart Association.

Key in the process of resuscitation is the immediate initiation of quality cardiopulmonary resuscitation (CPR) and the early use of automated external defibrillators (AEDs) by bystanders pending arrival of professional rescuers.

Typically, when sudden cardiac arrest occurs, death can result within minutes if the victim receives no treatment. Brain damage can begin to occur in just four to six minutes after the heart stops pumping blood. A victim’s chance of survival is reduced by 7 to 10 percent with every minute of delay until defibrillation. Currently, it is estimated that about 90 percent of SCA victims die before reaching the hospital.

Early CPR and rapid defibrillation combined with early advanced care can produce high long-term survival rates. When bystanders provide immediate CPR, and the first shock is delivered within three to five minutes, the reported survival rates from SCA are as high as 48 to 74 percent.

According to Barry H. Schwibner, MD, a co-founder of BABRIC Life Science Innovations, and co-inventor, “This particular device is in the form of a kit with AED elements contained in an adjustable universal frame for encompassing and holding a laptop or tablet computer. The elements are connected to and controlled by the joined computer, thus enabling the laptop or tablet to be used as an AED.”

"Universal availability with quick and easy access to reliable computer/AED devices and widespread training of the public, have the potential for markedly impacting current statistics,” said Schwibner. “We feel that the ideal place to start is with rugged laptops and tablets used in the field; such as those used by first responders, the military, and in government, sports, and industry. Additionally, with the kit’s manual defibrillator option, we see ideal 'fits' for this technology with Mobile Clinical Assistants (MCAs), rapidly increasing in use by physicians, nurses, and other medical support staff with the current trend toward electronic medical records (EMRs).”