People Are Reluctant to Use Public Defibrillators to Treat Cardiac Arrests

A new study suggests members of the public don’t know what defibrillators are, how to use them, or where to find them. It also suggests organizations don’t feel they should have one or feel unable to obtain one. 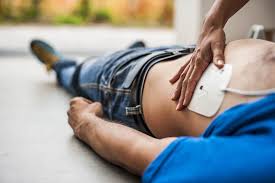 COVENTRY, UK--A study led by the University of Warwick suggests that people are reluctant to use public access defibrillators to treat cardiac arrests.

The analysis of existing international studies, which has been published in the European Heart Journal – Quality of Care and Clinical Outcomes, suggests that there are a number of factors that prevent members of the public from using them and potentially saving lives.

The researchers’ study suggests that many members of the public don’t know what an automated external defibrillator (AED) is, where to find one, and how to use one. This is despite AEDs being suitable for use by untrained members of the public. Although studies suggest there is variation across the studies they analyzed in the number of people willing to use an AED, a lack of confidence and fear of harm are common themes.

Although only a minority of out of hospital cardiac arrests occur in locations where use of a defibrillator would help save a life, AEDs are often poorly accessible or have limited availability; often their location is not known to even emergency services or those running training schemes. They also found that although members of the public saw the value of AED training most hadn’t undergone training.

Theo Arvanitis, Professor of e-Health Innovation and Head of Research at the Institute of Digital Healthcare, WMG, at the University of Warwick said: “Investment in more AEDs is great but it’s at least as important to maximize use of existing defibrillators. Many cardiac arrests that happen in public occur out of ‘normal business hours,’ therefore if an AED is kept in a building there is a good chance the building won’t be accessible. We would also like to see the message put out that these devices can be used without training. However our study found that those with training were more likely to use an AED so training is important too.”

It was found that public-access AEDs were often acquired by donation or fundraising rather than private purchase, and donation was a predictor of AED acquisition among college athletic departments in one study.

The research team also examined the reasons for not obtaining an AED. They were: cost; concerns about liability; not being considered necessary; lack of and/or attrition of responsible individuals; there was a good, local emergency service and there was a nearby hospital. One study reported that while 32% cited cost and 37% cited legal concerns as reasons not to obtain an AED, 55% thought affordability and 51% thought legal protection were good reasons to obtain an AED. They also highlighted that maintenance of AEDs was variable.

One study reported that all but one of 206 AEDs were ‘operable’ and ready for use, but many AEDs were not maintained or had no formal plans in place for maintenance or replacement. The systematic review conducted by the research team consisted of an analysis of 68 English language articles. Many of these were observational, many collected data retrospectively or were surveys. Due to the nature of the articles surveyed the team recommend further research is needed before making policy proposals.