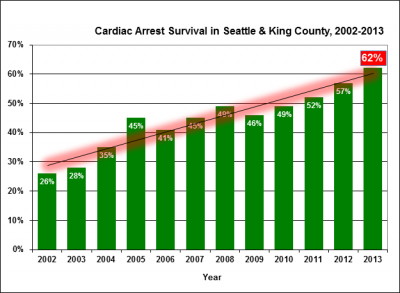 SEATTLE, WA--Someone who has a cardiac arrest in King County has a greater chance of survival than anyone else in the world, according the latest analysis by county officials. The survival rate for cardiac arrest in King County hit an all-time high of 62 percent in 2013.[1] By comparison, the cardiac survival rates in New York City, Chicago, and other urban areas have been recorded in the single digits.

“People are alive today in King County who would not have survived in most other places in the country,” said King County Executive Dow Constantine. “Our system delivers rapid, high-quality critical care wherever you are.”

King County’s success in saving lives is based in a coordinated, regional system where everyone – dispatchers, first responders, fire departments, law enforcement, paramedics, urgent care centers, and others – is guided by consistent medical direction and evidence-based practice.

The cardiac survival rate in King County has dramatically risen over the past decade or so, from an above-average 27 percent in 2002 to 62 percent in 2013. Strategies that have contributed to the rise include:

“This is a public health victory in preventing deaths that don’t need to happen in our community, and a great example of how a community-based strategy can get it done,” said Dr. David Fleming, Director and Health Officer for Public Health - Seattle & King County.

“We like to say that it takes a system to save a cardiac arrest victim, and it’s proven true again and again with every new survivor,” said Dr. Mickey Eisenberg, King County Emergency Medical Services Medical Director. “I thank everyone for their contributions to the success of our EMS/Medic One system.”

Introduced in Seattle in 1970, the Medic One program was one of the first in the nation to provide paramedic services; the program spread to all of King County starting in 1973. Our EMS/Medic One program has become a model nationwide for delivery of lifesaving first-responder services.

In recognition of EMS/Medic One system’s excellence, King County Executive Dow Constantine and the King County Council today proclaimed the week of May 19-25 as Emergency Medical Services Week in King County.

“I am so proud of our King County EMS. Their commitment to outstanding service and adaptation of technology is what led to this new higher survival rate,” said King County Councilmember Kathy Lambert, Chair of the Law, Justice, Health and Human Services Committee. “It’s another great reason why we have a high quality of life in King County.”

[1] The survival rate of 62 percent refers to cases of witnessed ventricular fibrillation for the year 2013 in Seattle/KingCounty (population 2 million).