Jordan Scott of St. John’s, Newfoundland, was named recipient of the Sudden Cardiac Arrest Foundation’s People Saving People(TM) Award, for saving the life of his brother, Joel, when he suffered sudden cardiac arrest (SCA) near Veracruz, Mexico. The award, which also recognized Esprit Whitewater crew members, was presented during the Emergency Cardiovascular Care Update, a biennial conference of the Citizen CPR Foundation.

“The People Saving People(TM) Award is an effort to recognize the critical importance of bystander action in cases of sudden cardiac death,” said Mary Newman, Sudden Cardiac Arrest Foundation president. “It is an honor to present Jordan with this award. As the engraving on the award says, quoting from an old Jewish proverb, ‘To save one life is as if you have saved the world.’”

It was November 18, 2008 and the Scott brothers were on a kayak and whitewater raft trip from Quebec to Mexico. As they entered the final 50-mile stretch of river, Jordan, 21, saw Joel, 25, flip out of his kayak. He paddled over and dragged him onto the riverbank. Fortunately, Jim Coffey, the owner of the adventure company, Esprit, had a well-stocked medical raft that included an automated external defibrillator. (The AED had been acquired after someone on an earlier excursion died from SCA.) 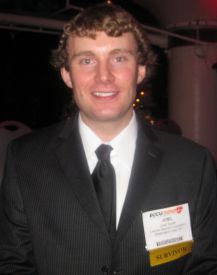 Fellow rafters quickly got to work, cutting off Joel’s gear, calling for help with a satellite phone, doing CPR, and using the AED. When Joel regained a pulse, they picked him up and carried him out of the canyon and onto the road.

Coffey whisked him to the hospital, where he was diagnosed with hypertrophic cardiomyopathy and received an implantable cardioverter defibrillator (ICD) to prevent sudden death in the future.

Since his near death experience, the brothers have continued their adven­tures. They bought a limousine and drove it from Ontario to Newfoundland, stopping to whitewater kayak along the way. And Joel has gone mountain climb­ing in New Zealand and taught ice climbing in Muskoka, Ontario.

Joel is now studying phi­losophy at Memorial University of Newfoundland and is taking a break from globe-trotting to the world’s most dangerous places. “It had such an effect on my family,” he said. “I try to take it a little bit easier now.”