Thanksgiving, Black Friday, Cyber Monday...what's next? #GivingTuesday--a day to give to charities like the Sudden Cardiac Arrest Foundation, a national nonprofit organization working to save lives threatened by sudden cardiac arrest, a leading cause of death in the U.S. 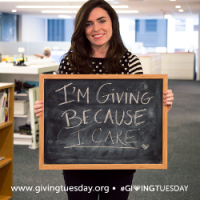 PITTSBURGH, PA--The Sudden Cardiac Arrest Foundation has joined #GivingTuesday, a first of its kind effort that will harness the collective power of a unique blend of partners—charities, families, businesses and individuals—to transform how people think about, talk about and participate in the giving season. Coinciding with the Thanksgiving Holiday and the kickoff of the holiday shopping season, #GivingTuesday will inspire people to take collaborative action to improve their communities, give back in better, smarter ways to the charities and causes they support, and help create a better world.

Taking place December 2 – the Tuesday after Thanksgiving – #GivingTuesday will harness the power of social media to create a national moment around the holidays dedicated to giving, similar to how Black Friday and Cyber Monday have become days that are, today, synonymous with holiday shopping.

Through this initiative, the Sudden Cardiac Arrest Foundation, a #GivingTuesday partner, aims to elevate the national dialogue about sudden cardiac arrest, a life-threatening condition that strikes about 1,000 unsuspecting individuals each day in the U.S., including young athletes. On average, only 10 percent of victims survive. The loss of life is equivalent to the number of people who would die if three 747s crashed every single day, killing everyone on board.

Sudden cardiac arrest occurs when the heart suddenly stops beating effectively, often without warning. For many victims, loss of a heartbeat, accompanied by sudden collapse and unconsciousness, is the first indication of a heart condition.

About the Sudden Cardiac Arrest Foundation
The Sudden Cardiac Arrest Foundation is a 501(c)(3) public charity whose mission is to raise awareness about sudden cardiac arrest and help save lives. Its programs include educational campaigns for schools and colleges and an online community for survivors, families affected by sudden cardiac arrest, and healthcare professionals designed to provide peer support and a platform for collaboration and advocacy at the local level.

About #GivingTuesday
#GivingTuesday is a movement to celebrate and provide incentives to give that culminates with a global day of giving on December 2, 2014. #GivingTuesday will harness the power of social media to create a global moment that is dedicated to giving around the world.