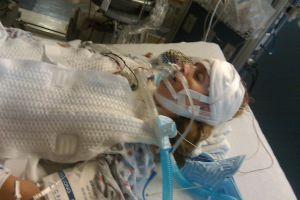 PITTSBURGH, PA--TV news anchor, Susan Koeppen, who serves as National Spokesperson for the Sudden Cardiac Arrest Foundation, shared her dramatic and inspirational story as keynote speaker at the Emergency Cardiovascular Care Update earlier this month in Las Vegas. “I’ve worked in television for two decades and we have a phrase in TV, ‘Dip to black,’” she began. “You dip to black in a story to create drama, evoke emotion, grab attention. On November 20, 2011, my world dipped to black when I suffered sudden cardiac arrest.”

The day before her event, Susan was with her husband and a group of friends, shooting skeet. “I was on top of the world. 39-years-old. Happy. Wife, mother, new job as an anchorwoman at the biggest TV station in town.”

Less than 24 hours later, she was in the ICU, clinging to life. Her husband Jim was told, “Your wife is alive, but she may never be Susan again.”

Susan, an avid athlete, had been training with some friends for the Pittsburgh Half-Marathon. “As we were leaving that morning, my daughter, who was four at the time, grabbed my leg, and her words haunt me to this day. She said, ‘Don’t go, Mommy, don’t go. Not today, Mommy.’ I said, ‘Honey, I will be right back.’” But Susan didn’t come right back. Thirty minutes after leaving her front door, she was down and out, dying on a sidewalk. She had suffered cardiac arrest. No pulse. Not breathing. Her friends started screaming for help.

Susan would later learn that her heart suddenly stopped beating due to a previously diagnosed heart condition—mitral valve prolapse—combined with running and dehydration. She had been told that MVP was “no big deal.” And in the weeks leading up to her event, though Susan experienced fatigue, excessive coughing that got worse with exercise, and was "always winded," no one recognized these could be warning signs. “I was a working mom of three young children,” said Susan. “Of course I was tired.” 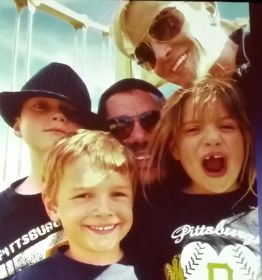 In the city known for gambling, Susan attributed her survival to luck. “I was in the right place at the right time,” she said. Two Pitt medical students, Vanessa Franco and Ranmal Samarasinghe, who happened upon the scene, started CPR. Lt. Dan Elias and his crew from Pittsburgh Engine 8 continued CPR and used a defibrillator to shock her heart back to a normal rhythm. EMS arrived a few minutes later and transported her to Shadyside Hospital, a few blocks away.

There she was treated with mild therapeutic hypothermia to preserve brain function. She subsequently received an implantable cardioverter defibrillator, which she nicknamed “Paramedic Pete.” She was released after two weeks in the hospital, though she was weak and frail and walked with a cane. Three months later, she had open-heart surgery to repair her mitral valve.

None long afterwards, Susan was back on the job and knew that with her public persona, she had to pay it forward. “I was shocked to learn that 70 percent of Americans say they don’t know CPR. Working on TV gave me the opportunity to tell my story and educate the public about the importance of learning CPR. I appeared on The Talk, The Doctors, and at my station, KDKA, we did numerous stories on CPR.”

The message Susan tries to convey is that “Something is better than nothing.”

And it’s working. As a result of publicity about Susan’s story, several lives have been saved. Brianne Cassidy and Donna Fryer, who saw Susan’s testimonials, helped save the lives of strangers by taking action and giving CPR.

But not every case has a happy ending. After all, on average, only 10 percent of victims of sudden cardiac arrest survive. Last month, Susan was at her desk in the newsroom when someone screamed, “Does anyone know CPR?” She ran to find her co-worker on the floor, unresponsive. 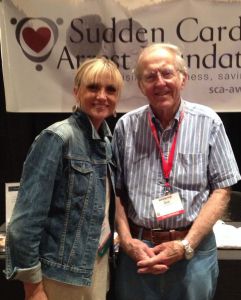 “I helped with CPR until firefighters arrived,” Susan said, “but unfortunately, he didn’t make it.” Still, she said, “We never gave up trying to save him.” Later she received a note of thanks from his daughter, who found comfort in knowing that bystanders and professional rescuers did everything they could to help.

Susan’s story resounded with the CPR advocates attending the conference. “I am living proof that CPR can and does save lives. Because someone decided to do something, I am here today. I got a chance to throw out the first pitch at a Pirates game. I ran the Pittsburgh Half- Marathon and finished it. And most of all, I am here to be a wife and mother.”

As the audience responded with a standing ovation, Susan left the stage to hug Dr. Guy Knickerbocker, one of the inventors of CPR, who was sitting in the front row.