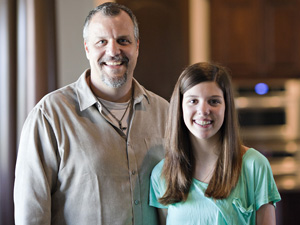 "From what everybody was telling me, I was doing my morning workout," Michael DeMarco said. "My wife and I were really heavy into the Cross Fit training stuff at the time. I was doing my bike, got up, started to feel a little off and I knew I needed to make my way toward the kitchen, towards help, before my daughter left for school."

"I was actually running late to the bus and I was brushing my hair, and all of the sudden my dad calls my name, but it was like a weird scream," Aly DeMarco said.

"Sudden cardiac arrest is when the heart suddenly goes into an unstable rhythm, where it cannot supply enough blood to the brain and to the rest of the body and one passes out," Robert Canby, M.D., an electrophysiologist at the Texas Cardiac Arrhythmia Institute (TCAI) at St. David's Medical Center in Austin, Texas, said.

"In 8 to 10 seconds, you can barely recognize that you're not feeling right before you pass out," Dr. Canby said. "Once you pass out, you can't call anybody. You can't activate 911. There's nothing you can do for yourself—you're entirely dependent on somebody else to activate that 911 system and provide CPR until appropriate therapy gets there."

When paramedics arrived, they used a defibrillator on Michael DeMarco before transporting him to a nearby hospital, where doctors lowered his body temperature to reduce damage and placed him in an induced coma.

He was then transferred to TCAI for specialized care.

"TCAI is an infrastructure that we created that goes beyond providing high-quality medical care for managing rhythm problems of different kinds," Andrea Natale, M.D., executive medical director and electrophysiologist at TCAI, said. "We created the right environment to do groundbreaking research, and this includes developing new ideas from testing the latest technology."

"It's kind of my safety net," Michael DeMarco said.

"The defibrillator is kind of like having your own paramedic with you," Dr. Canby said. "It's implanted into the chest, underneath your skin. It monitors the heart rhythm on a 24/7 basis. If one has a dangerous rhythm, it recognizes that rhythm and can provide life-saving shock therapy within 15 seconds of the onset of the rhythm."

"I'm so thankful they did what they did," Aly DeMarco said of her father's caregivers.

Michaeld DeMarco considers himself fortunate to be alive today. He credits the quick action of his daughter, the life-saving emergency care provided by paramedics and the advanced cardiac care he received at TCAI for giving him a second chance at life.