The New Orleans-style Second-Line March began at the Hyatt Regency New Orleans and concluded at City Hall where participants were welcomed by Council Member Jason Williams and EMS Medical Director Dr. Jeff Elder. They heard inspirational stories from survivors with a public call to action for more CPR education and training so that more lives will be saved.

The intent of the CPR Saves Lives March is to shed light on the hundreds of thousands of sudden cardiac arrest (SCA) victims who could survive each year if communities provided more CPR training, better care, and a greater number of automated external defibrillators (AEDs). Effective bystander CPR, provided immediately after SCA, can double or triple a victim’s chance of survival. Training and education across a variety of community populations is critical to seeing survival rates increase.

“Eighty percent of sudden cardiac deaths happen to someone you know and love in or near your home. By recognizing the signs of SCA, calling 9-1-1, and starting CPR, citizens and family can save those who would otherwise die without immediate help,” says Vinay M. Nadkarni, M.D., President of CCPRF and Endowed Chair of Pediatric Critical Care Medicine at the University of Pennsylvania School of Medicine. “Care that starts with citizen CPR and early defibrillation, a well-trained EMS system, and strong links in what we call the Chain of Survival are vital in every community.” 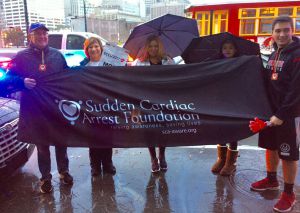 According to an Institute of Medicine (IOM) report, there are 1,600 preventable deaths from SCA every day in the United States. SCA occurs when the heart suddenly stops beating and there is no blood flow to the brain or other vital organs. Every year, approximately 300,000 men, women, and children in the U.S. die from SCA. Almost 80 percent of out-of-hospital cardiac arrests occur at home and many are witnessed by a family member. Generally, less than eight percent of victims survive.

Founded in 1987, CCPRF is a non-profit organization whose mission is to save lives from sudden cardiac arrest by stimulating effective community, professional, and citizen action. The foundation is comprised of four primary co-sponsors: the American Heart Association, the American Red Cross and the Heart and Stroke Foundation of Canada and industry partners. CCPRF holds its international ECCU conference every two years.