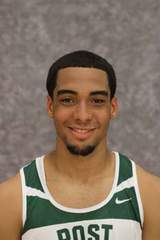 “It is with deep sadness that we announce the passing of student-athlete Rob Roman, who died at Thomas Jefferson University Hospital in Philadelphia this morning after he collapsed on Saturday, Sept. 22, during a cross country meet,” Post University President and CEO Dr. Tom Samph said in a news release issued on Friday morning.

Roman, of New York, was a business administration major in his second season with the cross country and men’s basketball programs, according to Post. He died on Thursday night.

"He was surrounded by his family and the thoughts and prayers of the entire Post University community," Samph said in a news release.

After the 2011-12 basketball season, he was named the junior varsity men’s basketball Most Valuable Player.

“Rob was the most genuine person I have ever had the privilege to be around,” coach Justin Bourne said. “He was such a great young man. Coaches are not supposed to have favorites, but Rob was my favorite. I cannot begin to explain the impact that Rob had on my life as well as all who knew him.”

“He was a leader, and beyond that a tremendous student, athlete and most importantly a great person who was well-liked by everyone he encountered. Our thoughts and prayers are with his family at this difficult time,” cross country head coach William Ferrare said.

Funeral arrangements are not available.

School officials said a memorial service will be held on campus, but the details are not yet available.