The Other Big Cause 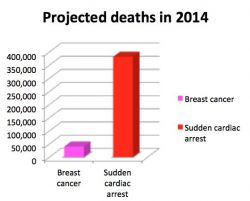 When most people think of October, they think pink. People everywhere know that October is breast cancer awareness month. About 40,000 women in the U.S. are expected to die from breast cancer in 2014, although fortunately death rates have been decreasing since 1989—largely because of increased awareness, earlier detection through screening, and treatment advances.[1]

But how many people know that October is also National Sudden Cardiac Arrest Awareness Month? Nearly 400,000 people will die from sudden unexpected cardiac arrest outside hospitals in 2014,[2] but most people have never even heard of the deadly condition.

Maybe we, as a nation, should also be thinking red. Maybe there is room another cause, like “Red October.”

Let’s learn from breast cancer awareness advocates. Let’s work together to increase awareness about sudden cardiac arrest, improve early detection efforts, and educate the public about its vital role in saving lives through CPR and use of automated external defibrillators (AEDs).

What are you doing to raise awareness about sudden cardiac arrest and save lives this October?

Learn CPR and how to use an AED and share your knowledge with others. Promote the deployment of AEDs. Submit a letter to the editor of a local newspaper to help raise awareness in your community. You can make a difference.

It's important to understand differences.

An organization I'm associated with teaches CPR. We focus on Bystanders, because that's the person who is there when 70% of these Out of Hospital Sudden Cardiac Arrests occur.

We are always taken by surprise by the number of students who think Heart Attack and Sudden Cardiac Arrest are just two names for the same thing.

Because all of us routinely run into someone who survived a Heart Attack, if the difference isn't clear, people tend to think that the odds of surviving a cardiac arrest are fat higher.

That is wrong. Most heart attacks are not fatal. Almost all cardiac arrests are fatal.

...unless you live in the Seattle area, the Phoenix area, the Hilton Head Island area, etc. These are places where the survival rate for witnessed cardiac arrests that present in a shockable rhythm runs from "more than half" to "two thirds."

What sets them apart? Lots of CPR training, lots of Automatic External Defibrillators, and lots of people who know how to recognize a cardiac arrest when they witness one and know what to do.

Which brings us full circle: cardiac arrests are so fatal where people don't know the difference, and not as fatal where they do.

I believe that the largest difference we can make in the needless death arena is by educating and training Bystanders. A plausible save opportunity of 100,000 per year exists. Do that for ten years, and you've got 1,000,000 people.

Bob
www.slicc.org
www.slicc.org/ClassVideo
(I guarantee you'll learn something from those videos you didn't know before, even if you are a doctor, nurse, paramedic, or EMT.)

Each and every class...

I make it a point at each and every CPR AED class I instruct to impress upon the students the difference between heart attacks and SCA. I believe a "Red October" sort of movement would be beneficial to spreading awareness of this devastating condition.