Loss of a Survivor and Champion

Jim Baum was a good neighbor. After seeing automated external defibrillators (AEDs) mounted in the Chicago O’Hare Airport, he spoke to a physician friend about them and decided that he should have a device in each of his homes because his neighbors were elderly. Little did he know, Jim would later be saved by one of the devices. That was in 2003.

Jim was a true believer in the value of AEDs. One Christmas, he gave each of his children AEDs for their homes. 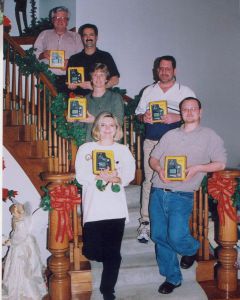 He also testified before the FDA on the importance of AEDs in the home, where more than 80% of sudden cardiac arrest cases occur.

Jim passed away on September 12, 2014 after a long battle with cancer. Thanks to use of an AED by bystanders, Jim lived 11 years after his sudden cardiac arrest.

It was an honor to meet Jim and his wife Nancy. He was a true champion for the cause and will be greatly missed.